National
Nukak Tribe in Colombia displaced from home
Thursday, May 11, 2006 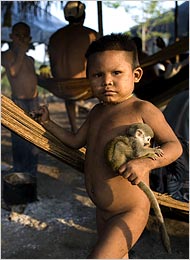 A small tribe from the Amazons of Colombia recently wandered out of their jungle homeland and said they wanted to join the white world. The Nukak-Mak� left the Nukak National Park under mysterious circumstances. It is believed they were told to leave by rebel forces but no one knows for sure. For now, the small tribe of 80 men, women, children and pet monkeys are being welcomed in the town of San Jose. Aid workers from the government are providing them with food and shelter amid discussion about their future. Only one tribal member, who spent some time away from the jungle, speaks Spanish. The rest are said not to understand the Colombian way of life. They are amazed at airplanes and the concept of money and property. In 2003, a different Nukak community left the jungle. They are now living in apparent bliss in another town, where they have become dependent on government aid. They say they want their children to attend school but don't want them to lose their language or culture. Get the Story:
Leaving the Wild, and Rather Liking the Change (The New York Times 5/11)
pwnyt