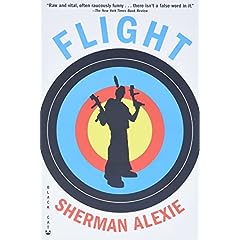 "Fifteen is a terrible age for a boy, especially a boy with no parents, a trail of abusive foster homes, a predilection for arson and a face so full of acne even his friends call him Zits. The half-Irish, half-American-Indian narrator of Sherman Alexie’s hallucinatory new novel (his first in more than 10 years), has begun to strike out against the court-appointed “Uncle Creepy types” and evil foster mothers he’s been asked to live with, shoving the latest mom and landing in a juvenile lockup. There he meets Justice, a white guru and anarchist who advises him to pray and then teaches him how to kill — and be killed. During a shooting spree in a bank, Zits is shot in the head by a guard, whereupon his adolescent soul vacates his corpse, resurfacing in the brawny frame of a racist F.B.I. agent headed for a 1975 meeting with a pair of celebrated Indian activists in Red River, Idaho. Within hours, he’ll be asked to shoot someone, and then he’ll go home to the agent’s beautiful wife. But before the sheets are tousled, Zits is out of this body and back at the battlefield of Little Big Horn, moments before Custer’s arrival. “Flight” is the sort of high-concept extravaganza that’s ordinarily reserved for summer adventure films, but while there are more than a few “Back to the Future” lines (“He leans over, picks me up and hugs me tightly. And I realize this is my father”), the book is far more stark and morally intricate than any Hollywood blockbuster. Despite its conceits, “Flight” is the most unpretentious novel I’ve read in a long time. It’s a narrative stripped to its core, all rage and heart. There’s not much landscape in the background, and the descriptions are the sketchy kind you’d expect from a kid. The narrator’s voice is also stripped — of everything except a survivor’s intuition. Alexie, while returning to a few of the signature themes of his earlier fiction (abandonment, alcoholism, domestic violence) has no predigested moral to pass on — no easy condemnation of whites or Indians or cops or even the foster care system, though they all get their due. Zits is always hardest on himself. In each of his new incarnations, it takes a beat or two to figure out who the good and bad guys are. “Am I young or old?” he asks a passing couple in a Tacoma alleyway, and then, “Am I white?” " Get the Story:
Native Son (The New York Times 5/27)
pwnyt Relevant Links:
Sherman Alexie - http://www.fallsapart.com Related Stories:
Review: Alexie makes readers laugh and cry in 'Flight' (04/25)
Review: Time travel in Sherman Alexie's 'Flight' (4/16)
Review: Native teen time travels in Alexie's 'Flight' (4/9)
Review: Alexie's 'Flight' a rollercoaster ride (3/26)
Sherman Alexie to read at Gonzaga University (01/26)
Sherman Alexie: Fake Indian stole my life story (01/30)
Sherman Alexie speaks about Martin Luther King (01/12)
Sherman Alexie on Success: 'I'm almost a rock star' (02/17)
Sherman Alexie proud to hang onto mullet hairstyle (11/24)
Native films to be screened during Sundance festival (01/07)
Review: Ten Little Indians by Sherman Alexie (6/30)
Critic: Sherman Alexie not above self-mocking (6/23)
Review: Nothing is sacred to Sherman Alexie (6/18)
Review: 'Ten Little Indians' by Sherman Alexie (6/16)
Alexie working on biography of Jimi Hendrix (6/13)
Review: Sherman Alexie's 'Ten Little Indians' (05/27)
Review: Sherman Alexie on being brown after 9-11 (05/06)
Sherman Alexie Story: What You Pawn I Will Redeem (04/21)
Sherman Alexie: A Native perspective on war (03/04)
Sherman Alexie is the stupidest war speaker (03/04)
Movie studio wanted J.Lo to play an Indian (02/14)
Sherman Alexie hard at work on 'sovereign' movie (5/11)
Sherman leaving Hollywood (6/23)
Advertisement