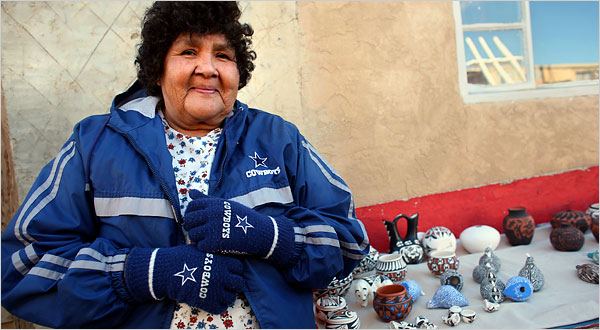 It isn't hard to find fans of the Dallas Cowboys in Acoma Pueblo, New Mexico. Fans like Gilbert Concho, a 60-year-old potter, who has a spare bedroom filled with Cowboys memorabilia. He owns 40 Cowboys T-shirts, 15 pairs of socks, a dozen hats, 10 jackets, 2 blankets, a wine bottle bearing Mel Renfro’s likeness, a pennant, an ashtray and a tortilla warmer. Or Tina Torivio. The 36-year-old, who used to watch games with her later father, used to dream of being a cheerleader and on once begged her relatives to take her to the Cowboys' stadium during a 1983 trip to Dallas. But not everyone likes the team. “I hate them,” guide Gary Keene tells The New York Times. “Too many Cowboys fans around here. The only good thing to come out of Texas, in my opinion, was ZZ Top.” Get the Story:
In an Ancient Culture, a Team Takes Root (The New York Times 1/12)
pwnyt $rl Dallas Cowboys - http://www.dallascowboys.com
Advertisement