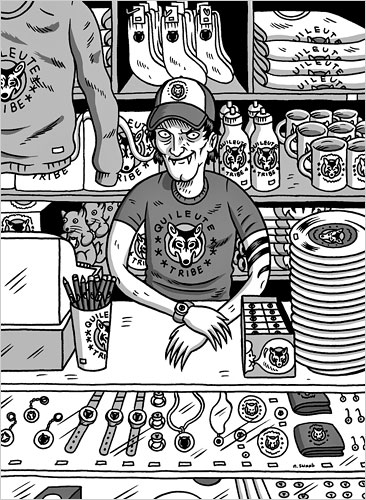 "All the world, it seems, has been bitten by “Twilight.” Conservative estimates place revenue generated from Stephenie Meyer’s vampire chronicles — the books, movies and merchandise — in the billion-dollar range. Scarcely mentioned, however, is the effect that “Twilight” has had on the tiny Quileute Nation, situated on a postage stamp of a reservation, just one square mile, in remote La Push, Wash. To millions of “Twilight” fans, the Quileute are Indians whose (fictional) ancient treaty transforms young males of the tribe into vampire-fighting wolves. To the nearly 700 remaining Quileute Indians, “Twilight” is the reason they are suddenly drawing extraordinary attention from the outside — while they themselves remain largely excluded from the vampire series’ vast commercial empire. Just last month, MSN.com issued an apology to the Quileute for intruding on its territory while videotaping a “Twilight” virtual tour in September. MSN.com sought permission from the Chamber of Commerce in nearby Forks, Wash., but didn’t pay the same courtesy to the Quileute. The video team trespassed onto a reservation cemetery and taped Quileute graves, including those of esteemed tribal leaders. These images were then set to macabre music and, in November, posted on MSN.com. The tribe quickly persuaded MSN.com to remove the Quileute images. But this was only one episode in the story of the tribe’s phenomenal, and apparently increasing, new fame. “Twilight” has made all things Quileute wildly popular: Nordstrom.com sells items from Quileute hoodies to charms bearing a supposed Quileute werewolf tattoo. And a tour company hauls busloads of fans onto the Quileute reservation daily. Yet the tribe has received no payment for this commercial activity. Meanwhile, half of Quileute families still live in poverty." Get the Story:
Angela R. Riley: Sucking the Quileute Dry (The New York Times 2/8) Related Stories:
Quileute Nation upset with MSN.Com 'Twilight' feature (01/11)
Quileute Nation won't translate phrase in 'Twilight' (11/30)
Quileute Nation to host Native 'Twilight' actor (7/17)
Quileute Nation opens doors to 'Twilight' fans (7/7)