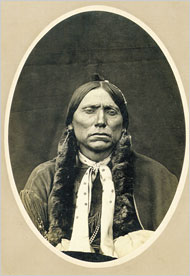 "In the 19th century, U.S. settlement of the western plains was held back for decades primarily by one Native American Indian tribe, the Comanches, who ranged over an area that comprises much of the present states of Texas, Oklahoma, New Mexico and Colorado. For the most part today, their role in history has faded from national consciousness and many people living on former Comanche land have little idea of who they were. But a new book about the Comanches and their last great chief, Quanah, is now a best seller. Our correspondent spoke with author Sam Gwynne in Houston and filed this report about the book Empire of the Summer Moon. In a recent appearance at Houston's Brazos book store, author Sam Gwynne addressed a question many people have asked him: Why did he embark on this study of the Comanches in 18th- and 19th-century North America? "They were the answer to almost every question you wanted to ask about the history for two centuries in this part of the country," said Sam Gwynne. "Let me give you a few examples. They were the reason that the Spanish empire's conquest of North America stopped right here - Comanches." As Gwynne notes, this one tribe of about 5,000 buffalo hunters once dominated around 384,000 square kilometers of the lower Great Plains. The fierceness of the Comanches drove most other native tribes from the area, kept the French out of Texas, and later, in the 1820's, motivated the leaders of a newly independent Mexico to invite settlers from the United States to Texas, so that they might serve as a buffer against the Comanches. In 1836, Texas won a war of independence from Mexico, but then the Texans spent another 40 years trying to deal with the Indians. Sam Gwynne expanded on his view of this once-powerful tribe." Get the Story:
Best-Selling Book Tells Story Of Fierce Comanches (Voice of America 8/11) Related Stories:
NPR: Interview with author of book on Comanche Chief Parker (06/24)
Review: A Comanche battle in 'Empire of the Summer Moon' (6/17)
Review: A Comanche leader in 'Empire of the Summer Moon' (6/11)
Review: Little news about Bighorn Battle in 'The Last Stand' (6/4)
This story is tagged under: