Friday, September 20, 2019
By Harrison Mantas
Cronkite News
cronkitenews.azpbs.org
WASHINGTON – Tribal representatives told a Senate committee Wednesday that the Federal Communications Commission is not doing enough to ease the regulatory burdens that keep Indian Country from getting wireless broadband access. The hearing before the Senate Indian Affairs Committee was in response to a November Government Accountability Office report that highlighted the barriers tribes have to overcome to get access to the wireless spectrum. An FCC official testified that the agency is working to make it easier for tribes to get spectrum licenses, but tribal officials said the agency needs to do more. Belinda Nelson, chairperson for Gila River Telecommunications Inc., noted that most of the recommendations she made Wednesday have been part of the record before the FCC since 2011, but the agency has not taken action. Belinda Nelson, chairperson of Gila River Telecommunications Inc., tells the Senate Indian Affairs Committee about the need for the Federal Communications Commission to better communicate with tribes. Photo by Harrison Mantas / Cronkite News
“This is a very disappointing dose of reality for our communities and one this committee should take notice of, as it will lead to tribal communities across the nation falling further behind in achieving broadband,” Nelson said in her prepared remarks. Broadband is not a luxury for tribal areas, said Kimball Sekaquaptewa, chief technology director at the Santa Fe (N.M.) Indian School. “In the global digital economy, the airwaves are essential elements to communicate and frankly to survive,” Sekaquaptewa said, reading from her prepared remarks. Nelson and Sekaquaptewa pointed to the difficulty tribes have of competing with larger telecom companies for spectrum licenses. Those licenses may cover geographic areas beyond the reservation, making it difficult for tribes to meet the required infrastructure investments the agency requires. Kimball Sekaquaotewa, chief technology director of the Santa Fe Indian School, tells the Senate Indian Affairs Committee how students at her school are held back by the lack of internet access at home. Photo by Harrison Mantas / Cronkite News
The GAO pointed out that tribes often rely on the “secondary market” where license holders will lease or resell sections of their lease to willing buyers. Sekaquaptewa noted that the spectrum license covering her community’s tribal land was being held by a speculator who had no interest in building infrastructure to help connect the tribe. GAO also said that a lack of data from FCC makes it difficult for tribes to know whether their land is covered by a current license holder, and who the license holder is. Don Stockdale, chief of the FCC’s Wireless Telecommunications Bureau, said his agency makes licensing information available to the public through its Universal Licensing System. Stockdale acknowledged its website is not the most user friendly, but said the FCC is in a multiyear process to modernize the system. When pressed by committee chair Sen. John Hoeven, R-N.D., about how this will impact Indian Country, Stockdale said the FCC has held workshops and made contact with tribes in the past, and will continue to reach out to help tribes with questions about the system. Stockdale also pointed out that in July the FCC launched a program where tribes get first crack at free access to certain wireless spectrum frequencies before they get auctioned off. Nelson praised this FCC program, but said she wanted to see the agency do more to promote the program in Indian Country. The November report was the last of three released by the GAO about how the FCC deals with tribal connectivity. In a September 2018 report, GAO pointed out that the FCC’s use of census tract data can give a false impression that more areas of the country have internet access than do in reality. If one house in a census tract has internet service, for example, the entire area is counted as being connected, which can prevent tribes from qualifying for grants needed to build broadband, because their lands may be incorrectly labeled as connected. Nelson said that she appreciates the work the FCC has been doing but that “consultation with the tribes … remains vital to getting the policies for tribal areas right. Sen. Martha McSally, R-Ariz., listens to witnesses testifying to the Senate Indian Affairs Committee about the challenges of getting broadband wireless access in tribal areas. Photo by Harrison Mantas / Cronkite News
As the hearing ended, Stockdale and other FCC officials met with Nelson and Sekaquaptewa, and Stockdale told both women he looks forward to communicating more with them in the future. Sen. Martha McSally, R-Ariz., said after the hearing that she hopes that’s the case – but intends to keep pressing the FCC for progress. “There’s some complex barriers for sure,” McSally said. “We need to keep holding their feet to the fire, that they’re following up on what they said their doing in order to clear up some of the GAO identified shortfalls.” For more stories from Cronkite News, visit cronkitenews.azpbs.org.
Senate Committee on Indian Affairs Photos 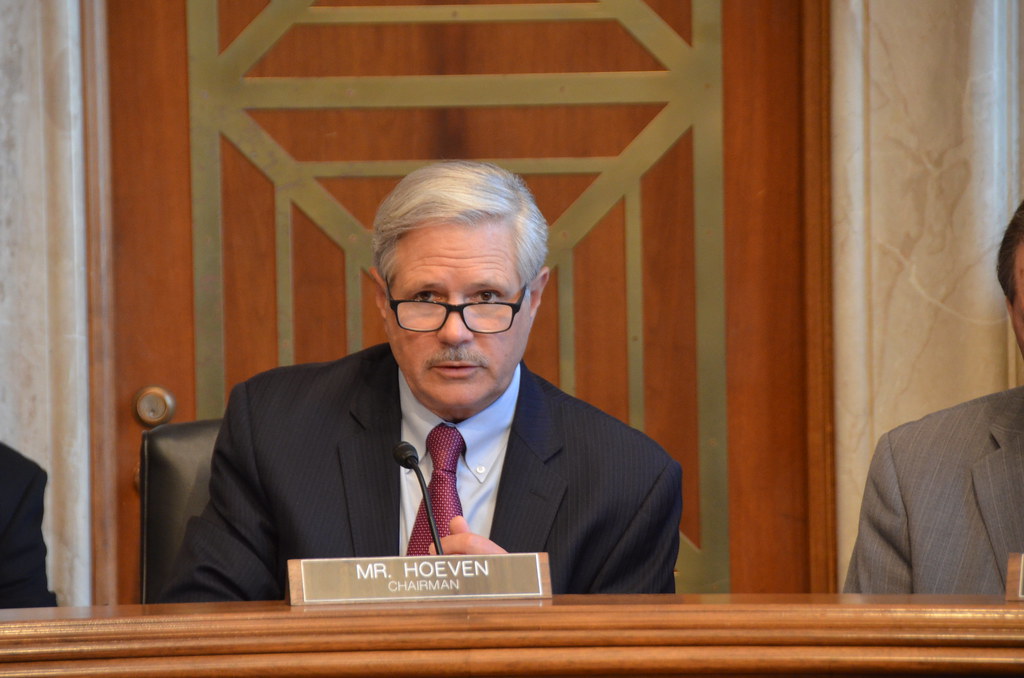