Senate Committee on Indian Affairs: Organizational Business Meeting (February 11, 2021)
Senate Committee on Indian Affairs schedules first hearing
Indianz.Com
The Senate Committee on Indian Affairs will hold its first hearing of the 117th Congress next week. The oversight hearing on February 24 is titled “A call to action: Native communities’ priorities in focus for the 117th Congress.” A witness list hasn’t yet been posted online. The committee, which has jurisdiction over Indian issues in the U.S. Senate, met for the first time on February 11. Sen. Brian Schatz (D-Hawaii) and Sen. Lisa Murkowski (R-Alaska) were formally selected as the new chair and new vice chair, respectively, at the organizational gathering. The committee typically convenes every Wednesday afternoon, Eastern time. During prior sessions of Congress, members took part in oversight hearings, legislative hearings and business meetings almost every week when lawmakers were in Washington, D.C. For the 117th Congress, the committee is evenly split between Democrats and Republicans. Democrats have the upper hand in the Senate, due to Vice President Kamala Harris’s role as president in the chamber. On the Democratic side, the committee consists of six members: • Sen. Brian Schatz (D-Hawaii), Chair
• Sen. Maria Cantwell (D-Washington), Former Chair
• Sen. Jon Tester (D-Montana), Former Chair and Former Vice Chair
• Sen. Catherine Cortez Masto (D-Nevada)
• Sen. Tina Smith (D-Minnesota)
• Sen. Ben Ray Luján (D-New Mexico), New member of panel On the Republican side, the committee consists of six members: • Sen. Lisa Murkowski (R-Alaska), Vice Chair, Former Vice Chair
• Sen. John Hoeven (R-North Dakota), Former Chair, 116th Congress
• Sen. James Lankford (R-Oklahoma)
• Sen. Steve Daines (R-Montana)
• Sen. Mike Rounds (R-South Dakota), New member of panel
• Sen. Jerry Moran (R-Kansas) Notably, no one from the Northeast or the Southeast serves on the committee, though there has been representation from North Carolina in the past. No one from California, which is home to the largest population of American Indians and Alaska Natives and more than 100 tribes, is on the panel either. The oversight hearing takes place at 2:30pm Eastern in Room 628 of the Senate Dirksen Office Building. A livestream will be available on indian.senate.gov.
Senate Committee on Indian Affairs Notice
Oversight Hearing “A call to action: Native communities’ priorities in focus for the 117th Congress” (February 24, 2021)
On Social Media

Proud to lead @IndianCommittee for the 117th Congress. On a bipartisan basis, this committee has always committed itself to the solidarity of Native people in Indian Country, in Alaska & in Hawaiʻi. And as Chair, it's a tradition I'll honor. There's much to do. Let’s get to work. pic.twitter.com/TYbzUOub0M

The Committee has a rich history of considering legislation in a bipartisan manner and I look forward to working with Chairman @SenBrianSchatz and the rest of the members this Congress to pass bills that help Native Americans.

Congratulations @SenBrianSchatz on taking over the gavel at @IndianCommittee! I look forward to your skilled leadership on behalf of Indian Country. pic.twitter.com/slXEABbmEx

Today, U.S. Senator Brian Schatz (D-Hawai‘i) and U.S. Senator Lisa Murkowski (R-Alaska) were both unanimously elected as Chairman and Vice Chairman, respectively, of the Senate Committee on Indian Affairs for the 117th Congress. 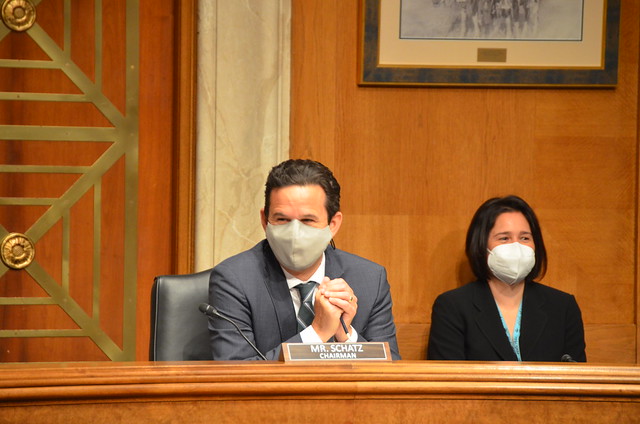