Indianz.Com > News > Brian Lightfoot Brown: Honoring a legendary Narragansett runner
Roger Williams on YouTube: Ellison “Tarzan” Brown – Boston Marathon winner
When A Star Ascends From Earth to the Sky
By Brian Lightfoot Brown
In the early morning hours of August 23, 1975, patrons were exiting a particular establishment by the Misquamicut coastline. There has been some debate as to the circumstances surrounding the end of this particular date. There has been some speculation that the makings of an altercation was spilling out of this local watering hole. There has even been some debate over who was directly involved in this alleged altercation, while others who were there on that night insist that there was no altercation whatsoever. Regardless of which account of this night you hear, the one tragic and undeniable result was the death of a man who was a deserving legend in his own time. A man who had helped put little, tiny Rhode Island on the proverbial map. Ellison “Tarzan” Brown, the proud Narragansett Indian who was a member of the U.S. Olympic team in 1936, was hit by the vehicle of a patron, Philip Edwards, who seemed to be in a rush to leave. 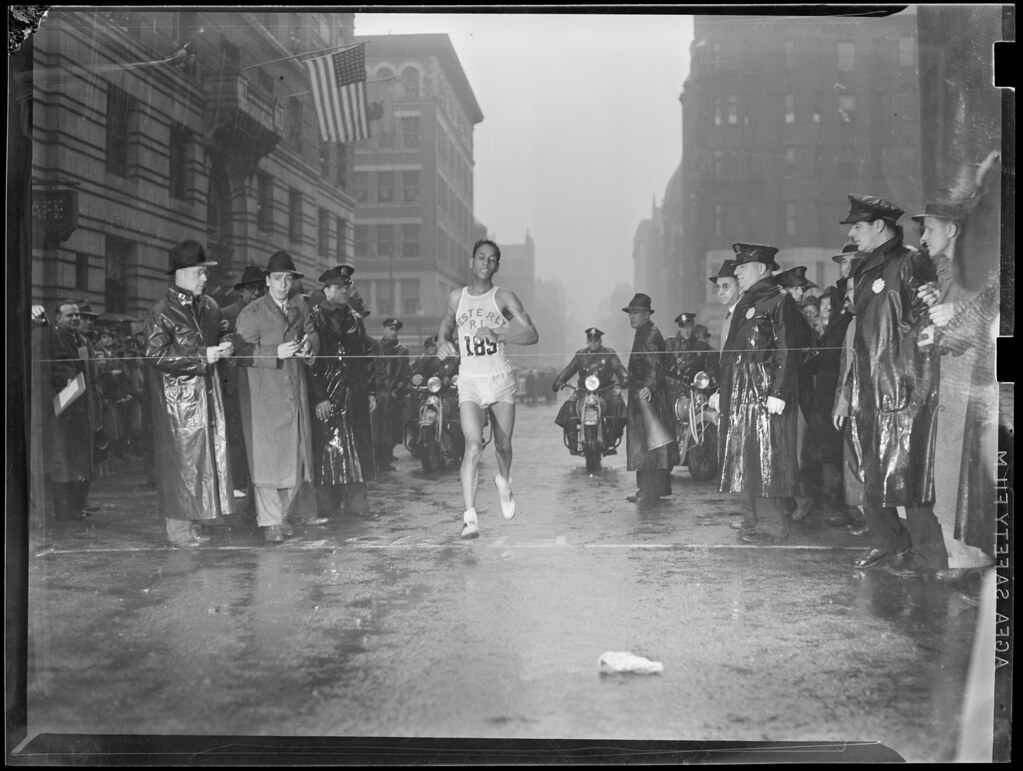 A photo from the collection of the Boston Public Library shows Narragansett citizen Ellison “Tarzan” Brown winning the Boston Marathon in 1939.
Brown, who was also a two-time Boston Marathon winner (1936, 1939), was gravely injured. Police arrived on the scene as many of the people in attendance were friends and relatives of “Tarzan” and there was now potential for chaos to erupt. Outrage and sorrow were the emotions later at the hospital when the legendary Ellison “Tarzan” Brown succumbed to his injuries and was pronounced dead. August 23, 1975. “Tarzan” was 61 years old, about a month shy of what would’ve been his 62nd birthday. He had been inducted into the American Indian Athletic Hall of Fame just 2 years earlier when he had told his loving wife Ethel, that he felt he didn’t have a lot of time remaining in this life. The passing of this amazing man, decades beyond his athletic accomplishments, struck a nerve with thousands of people. The man responsible for Brown’s death, Philip Edwards, was basically not penalized for what he had done. Brown was mourned by the Narragansett Tribe, both family and non-relatives. Other past runners, including his rivals, politicians and the media, paid their respects. In the early morning hours of August 23, 1975, as my paternal Grandmother’s brother took his final breath, I was merely reaching 13 months old on that very date. I was clearly too young to remember him personally, but have heard many stories about him from my elders who knew him. 46 years ago, one of the greatest athletes and a true Indigenous icon, made the transition from a star on earth to a star in the sky. He is still revered among the Narragansett people and even has an annual 5K road race named in his honor (Tarzan Brown 5K Mystic River Run). The race, which was first held just months after Tarzan’s passing, is scheduled for Sunday, November 7, 2021, at noon. My Grand uncle is the reason why Heartbreak Hill has that very name on the Boston Marathon course, he is the reason Native Americans remained even slightly visible in 20th century New England and he is a powerful reminder of Indigenous resilience and an undying spirit, even 46 years after he moved on to the Spirit World. R.I.P. Ellison “Tarzan” Brown.

@indianz @IndianCountry
A 5K in honor of Ellison "Tarzan" Brown, Narragansett Tribe, aka Deerfoot.
Don't forget to register for this year's Deerfoot 5k in Ninigret Park. Friday, Sept. 17th at 5:30pm. Cost is $25.
Register at our town website https://t.co/xSyoibXWiT pic.twitter.com/x5kygozObz