VOA News: Police and Protesters Clash During Mapuche Demonstration in Chile
Mapuche people under siege by Chilean military; genocide being charged
By Albert Bender
People's World
peoplesworld.org
In the southern sector of Chile, a “state of exception”—a euphemism for a “state of emergency”—has been declared by President Sebastian Piñera. Troops have been sent to the Araucania region, the land of the Mapuche Indigenous nationality. (Note: The government’s name for the area, Araucania, is considered a pejorative term by many Mapuche.) Piñera has said four provinces have experienced what he claims to be a “serious disturbance of public order.” Mapuche leaders, in turn, charge government forces with genocide—including the wanton invasion of Indigenous land, the burning of homes, the torture and killing of Native residents, and allegations of “drowning babies in the rivers.” The Mapuche are the ancient inhabitants of what is now southern Chile and Argentina. Numbering 1.7 million, they make up 12% of the Chilean population and are the majority of the country’s Indigenous people.

#Chile | Chileans take to the streets to protest the murder of a Mapuche youth by the military. pic.twitter.com/98lumTVjau

The invasion of the bloodthirsty, gold–hungry Spanish conquistadores in the 16th century set off a nearly 350-year military struggle from 1541 to 1883 to fight off European domination. The Mapuche maintained one of the most successful martial resistance movements in the history of Indigenous peoples in this hemisphere. Historically, their resistance is truly inspirational. Presently, the Mapuche are still engaged in what has been a long fight to be recognized under the Chilean constitution. The current constitution—due to be replaced—was crafted during the fascist military rule of Gen. Augusto Pinochet. The Chilean constitution is the only legislative document in all of Latin America that does not acknowledge Indigenous people within the country’s borders. Pinochet came to power in 1973, overthrowing socialist Salvador Allende with tremendous U.S. criminal complicity. The information sent by way of the “Indian Grapevine” at the time of Pinochet’s revolt was that he turned on Chile’s Indigenous peoples with a vengeance. There were reports that fascist doctors conducted fiendish Dr. Mengele-type experiments on Indigenous prisoners. As much of their remaining land in the intervening decades was confiscated and sold to commercial agriculture interests and forestry companies, one of the paramount Mapuche demands has been the restoration of historic lands. The land that the Mapuche are referring to are the vast tracts of Indigenous territory given to oligarchical, rich business families during the fascist dictatorship of Pinochet that lasted until 1990. 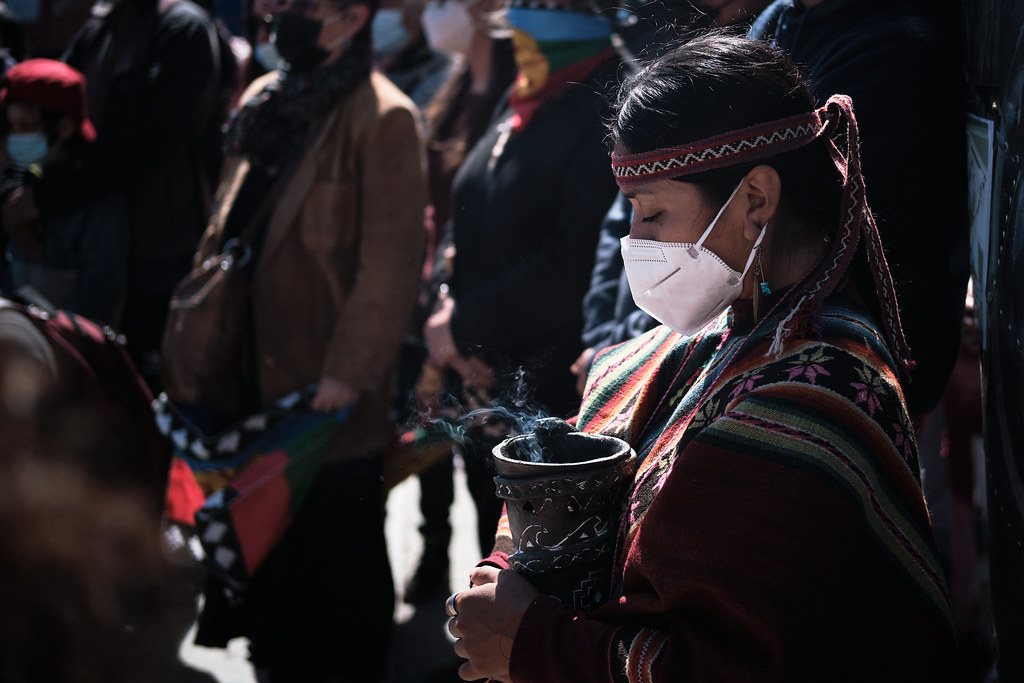 Connuestras_manos: A crowd gathers to protest the shooting of Yordan Llempi Machacán, a 24-year-old Mapuche man who was killed on November 3, 2021, in an encounter with military police in southern Chile where a significant number of Mapuche and Indigenous people live. The victim’s name has also been reported as Yordan Llempi Machacán in the media.
In the 1990s, with Chile returning to some semblance of democracy, the government promised it would return the confiscated land back to the Mapuche. But the land back effort has been minimal, and many so-called “owners” have been reluctant to sell. Bureaucracy, meanwhile, has stymied the process. There has been some violence in the Mapuche provinces, directed at trucks carrying lumber for forestry companies. The right wing in Colombia has tried to attribute arson attacks on forestry vehicles to Indigenous activists, for instance. The Mapuche, however, suspect non-Mapuche of torching their own trucks to make money by filing fraudulent insurance claims. Also, there are drug traffickers in the area where the vehicles have been burned, and the so-called terrorists are always masked. Many Mapuche see this as just an excuse for the repression of Indigenous people. The Mapuche are calling on international agencies to intervene in this and related matters. Recent actions of the Chilean National Congress, they say, are in violation of multiple international law charters, including the 1989 Indigenous and Tribal Peoples Convention of the International Labour Organization (ILO Convention 169) and the United Nations Declaration on the Rights of Indigenous Peoples. Both protocols require that national governments consult Indigenous peoples through appropriate procedures “whenever legislative or administrative measures affect them directly.” Hence, the Mapuche leaders have every legal right under international law to appeal to international tribunals to request intervention to address the oppressive edicts of the Chilean legislature and president. The Mapuche people continue to struggle peacefully for their rights and the recovery of their ancestral land in the face of increased repression, including more evictions, military raids, imprisonment, death, and genocide. An international clarion call to aid in their struggle has been sounded and must be answered by progressive forces worldwide. Note: Thumbnail photo of Mapuche flag by Catalina Rojas Albert Bender is a Cherokee activist, historian, political columnist, and freelance reporter for Native and Non-Native publications. He is currently writing a legal treatise on Native American sovereignty and working on a book on the war crimes committed by the U.S. against the Maya people in the Guatemalan civil war of the late 20th century. Albert is a consulting attorney on Indigenous sovereignty, land restoration, and Indian Child Welfare Act (ICWA) issues. He is the recipient of several Eagle Awards by the Tennessee Native American Eagle Organization. This article originally appeared on People's World. It is published under a Creative Commons license.