Students at the Holy Rosary Mission, an Indian boarding school on the Pine Ridge Reservation in South Dakota. Tim Giago can be seen in the bottom row, third from left. Courtesy photo
An era of shame: The boarding schools
By Tim Giago (Nanwica Kciji – Stands Up For Them or Defender)
PINE RIDGE RESERVATION — Holy Rosary Indian Mission, or Red Cloud Indian School as it now calls itself, is located on the Pine Ridge Reservation. Peter Smith, a writer for the Associated Press, wrote what he probably surmised to be the definitive article on the Indian boarding schools. The local Rapid City Journal picked it up and gave it a headline, “Ex-boarding school confronts its past.” In the estimation of the staff and management of Native Sun News Today this article missed the point by a mile and a half. Here are a few stories by and about former Mission students that hold the terrible truth.

It seems that the former Holy Rosary Indian Mission boarding school is feeling pangs of guilt and is undertaking what it calls “Truth and Healing.” The school now wants to hear the stories of former students and open its archives and face its past. Read on but please understand the some of the stories of former students are very graphic. Read with caution. And for the staff at Red Cloud, put these stories in your files.
Red Cloud Indian School: Indigenous Peoples' Day
Back in the 1940s Richard Brewer and his brother Gabby went home for a long weekend holiday. The weather was so nice that their father decided to take them out to White Clay Dam for a little fishing. No one knows how it happened, but Richard slipped and fell into the freezing water. As he started to go under his father jumped in to save him. It didn’t work out that way and father and son both drowned. After their funerals Gabby returned to the Mission, visibly a broken boy. The boys called him Gabby because he was always chattering away with many things to talk about. And now he just sat there with his head down and hardly talked at all. The boys did all that they could, as his friends, to cheer him up, but it was of no use. One night at roll call Gabby was gone. He ran away from the Mission to be with his family. The Mission prefects did not have far to go to find him and return him to the Mission. He was at his home in Pine Ridge grieving. All of the Mission boys were commanded to watch as Father Edwards approached Gabby and said, “Assume the position.” All of the boys knew what that meant. Gabby dropped his pants and bent over to grab his ankles. Father Edwards took his big leather belt and wacked Gabby across his bottom. Gabby didn’t want to show any emotion, but after the belt smacked him across his behind for the third time, he let out a cry. That is all Father Edwards wanted and he stopped beating him. Mr. John Bryde, a prefect that would go on to become a Jesuit Priest and eventually head of the school took Gabby to the barber shop after the beating and told the barber to shave his head. The barber, a Lakota man, refused. Mr. Bryde grabbed the electric clippers and did the job himself. He then took two pieces of cardboard and made a sign that read, “I am a runaway.” He hung the sign on Gabby’s front and back. And so here is this young boy still grieving the death of his father and brother, being humiliated and embarrassed. He wore the signs to Church the next morning and listened as some of the girls snickered at his bald head and the signs. That evening at bedtime he talked to some of his friends and said he had heard that if one washed their head with soapy water every night the hair would grow back faster. And so every night this lonesome boy could be seen at the washbasins rubbing soapy water into his scalp. No priest, prefect or nun ever thought that this young man was grieving deeply and really needed counseling instead of punishment. 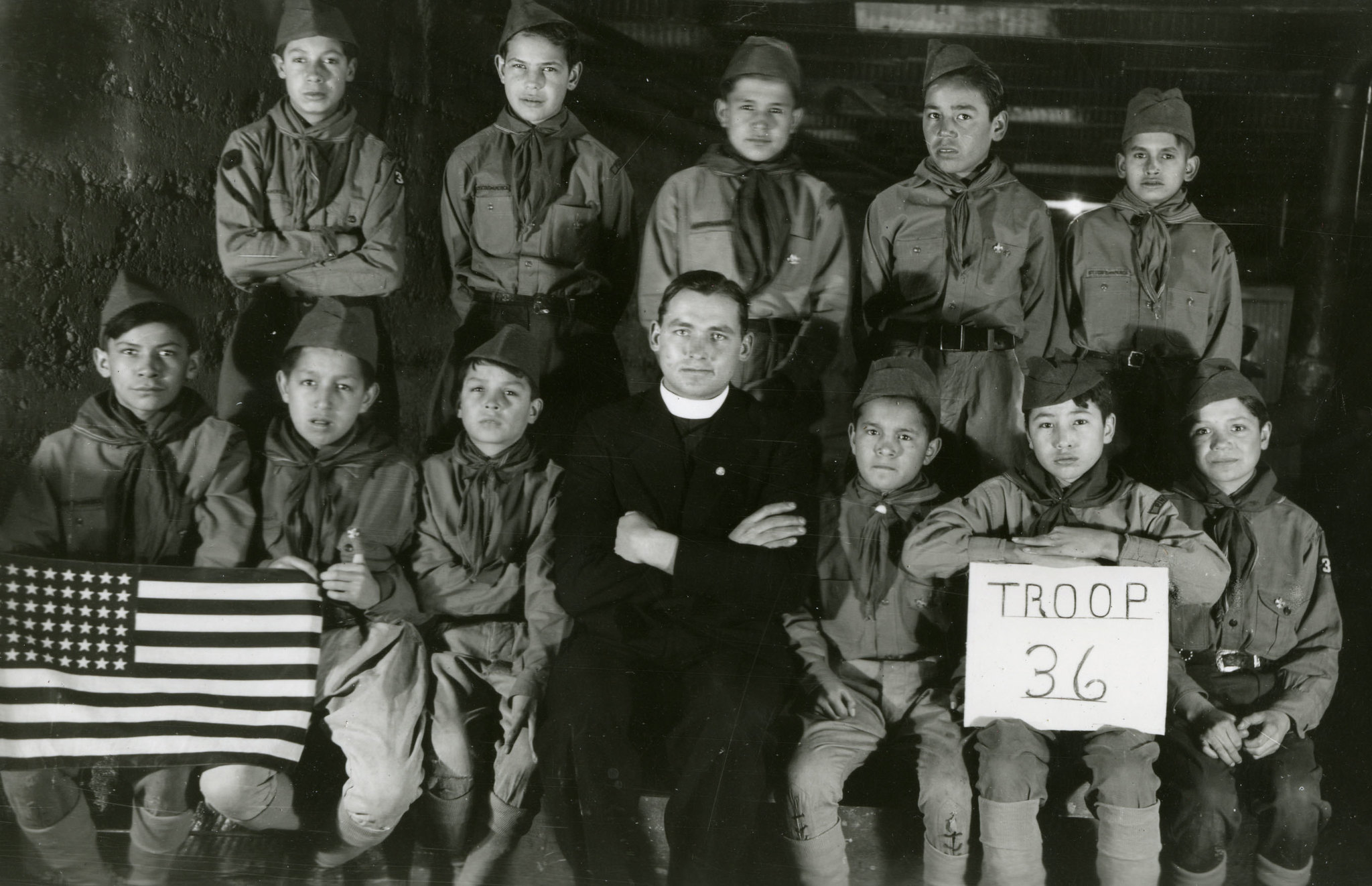 Goldie Walks Under the Ground and Shirley Giago held a terrible secret. They had both been raped by a Mission Groundskeeper who had a house on the Mission grounds. His name was Albert Roki. Goldie and Shirley were just two of the hundred or more girls Roki raped in the years he worked at the Mission. Both girls took their story to the nuns but they were ignored, but it seems the nuns felt that the story would come out eventually so one day Albert Roki disappeared. Boom, just like that he vanished and was never again seen on the Mission grounds. He never paid the consequences for the damage he did to so many little Lakota girls. Holy Rosary Indian Mission priests and nuns had but one purpose and that was to strip the Lakota culture and traditional spirituality from the hearts and minds of the young Indian boys and girls placed in their care. But in order to do that they had to convince the children that their parents and grandparents had no culture and were godless. In many cases they destroyed the children in the process. The Holy Rosary Mission on the Pine Ridge Reservation in South Dakota. Photo: Raymond Bucko, SJ
It would take another chapter to describe how so many of the Mission kids ended up in prison or as falling down alcoholics. Holy Rosary Mission and St. Francis Indian Mission at Rosebud destroyed so many Lakota lives and now they are asking for reconciliation and forgiveness? A ten year old boy named Pinky Merrival broke one of the Mission rules and Buzzy Torres, who was a student at the Mission at the time, spoke about how a Mr. Brown started to beat Pinky with a leather strap and became so enraged as he beat the poor boy that pretty soon he was beating him with the belt buckle. All of the little boys who witnessed this were screaming and begging Mr. Brown to please stop. “You’re killing him,” they shouted, but the beating went on until Pinky finally collapsed. Every boy and girl at the Mission knew the taste of Ivory Soap because that is the soap the priests used to wash out our mouths if we were caught saying any Lakota words.

#OrangeShirtDay reminds us of the trauma Indian boarding schools inflicted on indigenous people. Today we begin our own Truth & Healing Initiative to openly acknowledge and grieve the tragic injustices in our past. Learn more and join us. https://t.co/2QBgjxSrRk pic.twitter.com/XjQa9F8VGr

The Lakota boys and girls came from loving and caring Lakota families. They did not have a choice when it came to the boarding schools. In the beginning it was the law. It was a monster of an experiment exacted on the Indian children that eventually failed, but the cost to so many children was horrific. Some former students may think that reconciliation is good, but others will never give into it. One former St. Francis student said, “I will never forgive them for what they did to us. Even at my age I still have nightmares.” And in the face of all that, South Dakota passed a law that does not allow childhood sexual abuse survivors over age 40 to sue Churches or organizations. All boarding school sex abuse victims are now over 40. Marci Hamilton, a Professor at the University of Pennsylvania who runs an organization advocating for removing the statute of limitations on childhood sexual abuse, told lawmakers that South Dakota is the only state since 2002 to put restrictions on the statute of limitations. Tim Giago. Photo courtesy Native Sun News Today
Most of the boarding school victims from the 1940s are now deceased. Their suffering will never be addressed. And those still living are now in their 80s and they also will never see justice. Sadly, in many ways, the boarding school experiment worked. Many of the students became Catholics, Mormons, Baptists and on and on. Some even became ministers and continued the efforts of the government and churches to convert their own people. The boarding school experiment failed with some, but it left the survivors confused about who they were and what they could do to return to their traditions. The unholy impact of the boarding schools left its mark to the detriment of thousands of Native American children. Contact Tim Giago at najournalist1@gmail.com Note: Content © Tim Giago
ShareTweet
Advertisement