A panel promoting USDA Indigenous Food Sovereignty Initiative is seen at the White House Tribal Youth Forum in Washington, D.C., on November 14, 2022. Photo by Indianz.Com (CC BY-NC-SA 4.0)
Tribal youth get a taste of food sovereignty at White House gathering
By Acee Agoyo
Indianz.Com
WASHINGTON, D.C. — Dozens of young Native people flocked to the nation’s capital for the return of the White House Tribal Youth Forum, where they saw food sovereignty in action. During the all-day event, held at the headquarters of the Department of Health and Human Services on Monday, two prominent Native chefs demonstrated how they incorporate traditional Native foods like bison and berries into their dishes during a live demonstration. Sean Sherman, a citizen of the Oglala Sioux Tribe, and Crystal Wahpepah, a citizen of the Kickapoo Tribe, are part of a growing movement that emphasizes the plants, animals and other natural resources that Indian nations relied on for generations. “We practice a lot of Native food ways, a lot of sovereignty and we showcase a lot when it comes to our Native food producers,” Wahpepah said in describing how she operates her brand new restaurant in Oakland, California. “We really try to highlight that on our menu — where the food comes from,” the Native chef said of her namesake business, known as Wahpepah’s Kitchen. From left, Sean Sherman and Crystal Wahpepah participate in a cooking demonstration at the White House Tribal Youth Forum in Washington, D.C., on November 14, 2022. Photo by Indianz.Com (CC BY-NC-SA 4.0)
But as Native youth pointed out during the gathering, the resources that their tribal nations once depended on are often out of reach in their present-day communities — usually as a result of negative, harmful and even genocidal federal government policies. A lack of traditional food options, whether it’s salmon or corn, has contributed to high rates of diabetes and other health problems among American Indians and Alaska Natives. “I grew up surrounded by high-processed diet that resulted in obesity, diabetes and cardiovascular disease,” said Hannah Corbett, a young citizen of the Cow Creek Band of Umpqua Indians from Oregon. “The over-consumption of the low-cost, but convenient, food came at an expense, which is the health of our relatives.” The government officials who brought Native food sovereignty to the forefront at the event largely agreed with the assessments offered by the youth. Deputy Secretary Jewel Bronaugh of the Department of Agriculture, for instance, noted that federal programs have not always had tribal interests at heart. “Our historical federal food agriculture programs were not always designed to support Indigenous food and Indigenous cultures,” Dr. Bronaugh told the youth. “Actually, they have been designed specifically to interrupt food independence — and we acknowledge that.” “And that’s the first place where we start to make changes,” said Bronaugh, who joined President Joe Biden’s administration as the second-in-command at USDA in May 2021. From left, U.S. Department of Agriculture Office of Tribal Relations Director Heather Dawn Thompson, Food, Nutrition and Consumer Services Deputy Under Secretary Stacy Dean and Deputy Secretary Jewel Bronaugh host a food cooking demonstration and food sovereignty discussion at the White House Tribal Youth Forum in Washington, D.C., on November 14, 2022. Photo by Indianz.Com (CC BY-NC-SA 4.0)
Specifically, Bronaugh said the USDA has continued to implement the Indigenous Food Sovereignty Initiative that Secretary Tom Vilsack announced at the White House Tribal Nations Summit in November 2021. Over the past year, the agency has been partnering with Indian Country organizations, along with individuals like Sherman and Wahpepah, to help reverse the centuries of policies that have prevented Native people from carrying out their traditional methods of health and well-being. Addressing Native youth directly, Bronaugh said: “In so many ways, you — as a generation — are changing that game. Your voice and your emphasis, and I’ve heard you all speak at other events, is changing the trajectory of the way we are returning to Indigenous ways and Indigenous foods and medicine.” The Indigenous Food Sovereignty Initiative page at usda.gov features some of the results of the ongoing effort. The USDA has produced a handbook in conjunction with the Intertribal Buffalo Council to help cattle producers transition to bison, a traditional food source that was nearly wiped out in the late 1800s, as the U.S. government often violently sought to take land, resources and people from Indian nations. Another component of the USDA initiative is a partnership with the Native American Food Sovereignty Alliance that focuses on traditional seeds. Six fanning mills, which are used to clean seeds and grain, have been purchased to establish regional distribution hubs across Indian Country, from New Mexico to Montana to Wisconsin. Native food products on display at the White House Tribal Youth Forum in Washington, D.C., on November 14, 2022. Photo by Indianz.Com (CC BY-NC-SA 4.0)
The agency is also promoting food products created by tribal and Native-owned businesses. Some of them, like a wild rice pancake mix from Red Lake Nation Foods in Minnesota and peas from a co-operative farm on the Tohono O’odham Nation in Arizona, were on display at the White House Tribal Youth Forum on Monday. “We want to support producers and we want you guys to think about a career in this space,” Heather Dawn Thompson, a citizen of the Cheyenne River Sioux Tribe who serves as director of the Office of Tribal Relations at USDA, told the youth. “Both going into a career as chefs — like our guests today — but also as producers, both in growing foods and also adding value to create products like these.” In an interview, Bronaugh re-emphasized how the USDA is relying on tribal voices to help guide not just the Indigenous Food Sovereignty Initiative but other programs at the agency. The Food Distribution Program on Indian Reservations, commonly known as “commodities” among generations of Native families, and the Supplemental Nutrition Assistance Program, often described as food stamps, are two of the most well known federal services in Indian Country. “We have to understand the importance of tribal nations and indigenous foods and all of the ways that we eat, but we really have to support the priorities of our tribal nations,” Bronaugh told Indianz.Com. “It is our role and responsibility to recognize that and to be able to put resources and support behind that because it’s about proper nutrition, it’s about supporting culture, it’s about creating a solid supply chain and it’s about just carrying that way of life forward,” said Bronaugh, who most recently served as the leader of the Virginia Department of Agriculture and Consumer Services. Thompson told Indianz.Com that her office has taken the lead in developing the partnerships needed to implement and expand the USDA’s food sovereignty efforts. She said the work is tied to geographical regions used for the FDPIR commodities program — the agency started off with the Midwest Region and the Mountain Plains Regions so the resources currently available online, which include cooking videos and recipes, are based on those parts of the country, which include 16 states. “The next area we’re going is Southeast and Northeast,” Thompson said in an interview, referring to the regions that cover 15 states, from Maine to Florida. “So if there are chefs that are interested in partnering with us from those regions, we’d love to hear from them,” Thompson said. “Those are the next commodity regions that we’re going to use this same model — where we’re going to take Indigenous foods and foraged foods and create recipes with the commodities program.” Indianz.Com
Going forward, USDA is expected to announce even more developments at the upcoming White House Tribal Nations Summit, which takes place November 30 and December 1 in Washington, D.C., The event is returning to an in-person format following last year’s virtual gathering, which Secretary Vilsack addressed by video amid the COVID-19 pandemic. “USDA is committed to empowering tribal self-determination and bringing Indigenous perspectives into agriculture, food, and nutrition,” Vilsack said in a news release on Monday. He is expected to be one of several Cabinet secretaries on hand for the upcoming summit, which President Biden revived after a four-year absence during the prior administration. Biden also brought back the White House Tribal Youth Forum, which began during the Barack Obama administration, when he served as vice president. The 2021 event was held virtually due to COVID-19 — this year, Native youth filled the Great Hall of the Hubert H. Humphrey Building in D.C. for discussions on climate change, languages, mental health and sports and entertainment.
White House Tribal Youth Forum 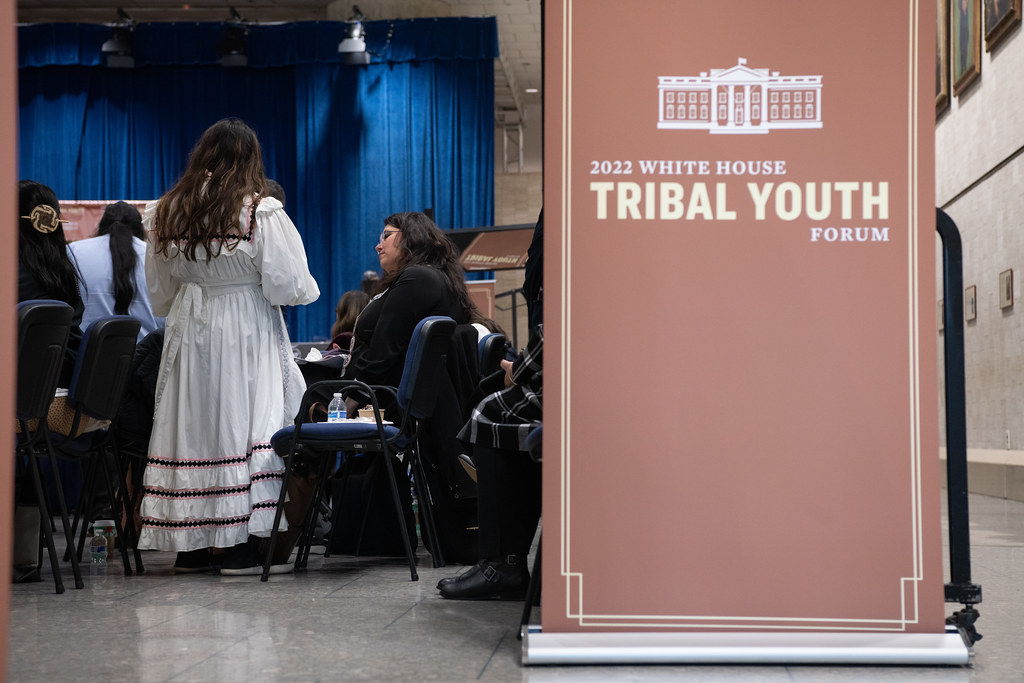