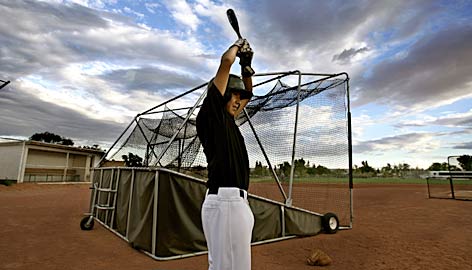 Native athletes and teams from reservations are known to shine at the high school level. But the picture changes when Native students try to build on their success at the college and professional level. "As a Native American, nobody takes you too seriously that you can play at that level," Ryne Hemstreet, a member of the Navajo Nation, tells USA Today. Hemstreet, a junior at a school on the Navajo Nation, will be moving to Phoenix to finish high school. He hopes his baseball skills get him noticed so he can go to college on a sports scholarship. He faces long odds. Among NCAA schools, only 0.8 percent of student athletes were Native American, according to figures from 2002. At the pro level, there are even fewer Natives. Navajo/Pueblo golfer Notah Begay III, the first Native to win on the PGA Tour, said tribes aren't doing enough to foster growth. "Until you see a consolidation of resources and communities between successful tribes that have the opportunity to make a difference," he tells USA Today, "we're still going to struggle in the battle to get Native Americans on Division I playing fields." Some tribes getting into the action, but in different ways. The Mohegan Tribe of Connecticut owns a women's NBA team. The Yakama Nation bought a minor league basketball team. Several tribes have started boxing clubs. Get the Story:
Native American athletes face imposing hurdles (USA Today 2/22)
Tribes making inroads in sports industry (USA Today 2/22)
Tournament helps colleges tap into Native American talent (USA Today 2/22)
Advertisement