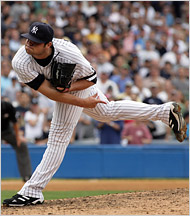 Joba Chamberlain, a member of the Winnebago Tribe of Nebraska, is pitching a near perfect record with the New York Yankees. Chamberlain, who is about to turn 22, has pitched in five games, all victories. He had 11 strikeouts in seven shutout innings and has only allowed two hits and two walks to get past his 100-mph throws. "He’s definitely under control for somebody that throws that hard," fellow Yankee Roger Clemens told The New York Times. Chamberlain grew up in Lincoln, Nebraska, and was raised by his father, Harlan, who is disabled by polio. He considers his father to be his best friend. "We still go places together, go to the mall, just kind of hang out. It’s awesome," said Joba, who has a 15-month-old son Karter. Get the Story:
Yankee With Bright Future Is Guided by His Past (The New York Times 8/21)
pwnyt
Sudden Impact, but the Wrong Kind (The New York Times 8/21) Relevant Links:
New York Yankees - http://yankees.mlb.com Related Stories:
Native athletes headed to major league baseball (3/29)
Search