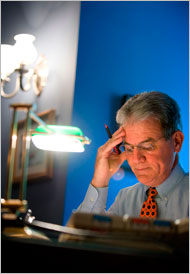 The Senate is expected to vote on an omnibus bill that includes 35 pieces of legislation being held up by Sen. Tom Coburn (R-Oklahoma). Coburn, who defeated Cherokee Nation member Brad Carson in 2004, has "holds" on bills like the Drug Endangered Children Act, the Effective Child Pornography Prosecution Act and the Mentally Ill Offender Treatment and Crime Reduction Reauthorization and Improvement Act. He objects to any legislation that he believes duplicates existing programs, creates more bureaucracy or is wasteful. "If we pass a new program, we either ought to get rid of the old program or we ought to make it to where it blends with this other one so it's effective," Coburn told The Washington Post. "Almost everything that they've offered has a duplicate program out there that they're not either eliminating or changing." In the past, Coburn put holds on the Indian Health Care Improvement Act. He relented this year but proposed amendments on issues -- like disenrollment and blood quantum-- that were not directly related to the bill. A vote on S.3297, which contains the 35 bills, could come this week. The Mentally Ill Offender Treatment and Crime Reduction Reauthorization and Improvement Act includes grants for tribes. Get the Story:
Senate's 'Dr. No' Spurs Showdown Over Spending (The Washington Post 7/28)
pwpwd
Democrats Try to Break Grip of the Senate’s Dr. No (The New York Times 7/28)
pwnyt
This story is tagged under: