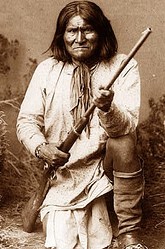 "Of all the strange lawsuits to which this blog has devoted pixels, this one definitely ranks among the very strangest. Descendents of the Apache chief Geronimo (pictured) have sued Yale University and the school’s famous secret organization, Skull and Bones, asking for the release of Geronimo’s remains. Let’s write that again, just to make sure it sinks in: Descendents of Geronimo are asking a secret society at Yale called Skull and Bones to give back Geronimo’s, well, skull and bones. (Hence the name?) Here are stories from Fox News and the Yale Daily News. According to reports, the complaint (not yet available), filed in federal district court in Washington, D.C., alleges that members of Skull and Bones long ago invaded Geronimo’s grave to steal his skull for, as Fox puts it, “fraternal” (and, it seems, skull-related) “rituals.” A handful of others, including Yale, are reportedly named in the complaint." Get the Story:
Law Blog Lawsuit of the Day: Geronimo v. Yale (The Wall Street Journal 2/18) Related Stories:
Geronimo descendant seeks reburial of remains (2/17)
This story is tagged under: