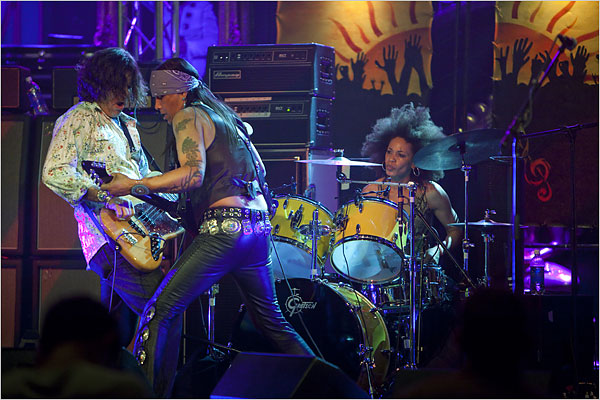 "Things got promising Tuesday night at the Hard Rock Cafe when, midshow, some grips cleared the stage, pulled out a red rug on which a drum kit had already been laid out, and secured it with weights. Until that point the Native Music Rocks tour had been humming along peaceably — some neo-soul, some blues, some 1970s roots-rock. But while those acts placed Native American music in a continuum with various eras in mainstream pop, Cindy Blackman — formerly the drummer in Lenny Kravitz’s band, and a well-regarded jazz hand in her own right — had disruption in mind. Ms. Blackman, to whom the drum kit belonged, was performing in Micki Free’s American Horse Trio — Mr. Free on guitar, the bass player David Santos and Ms. Blackman — the anchor act of this showcase of American Indian artists playing contemporary music, sponsored by the Seminole Tribe of Florida. For almost a year, on and off, it’s been touring Hard Rock Cafes. Hard Rock International, which includes the chain of cafes, was sold to the Seminole Tribe of Florida in 2006. Mr. Free is the tribe’s director of Seminole heritage events and promotions, a former member of the 1980s funk-R&B group Shalamar (with which he won a Grammy, in 1986, for work on the “Beverly Hills Cop” soundtrack) and an impressive guitar player, schooled in Hendrix and Prince. But he was no match for Ms. Blackman, who over the course of an hour was rarely short of astonishing: versatile, dexterous, powerful. That the trio’s music — blues-rock with psychedelic edges — was unfashionable didn’t make it any less blistering." Get the Story:
Music Review: Contemporary Sounds From Performers Whose Roots Run Deep (The New York Times 9/10)
This story is tagged under: