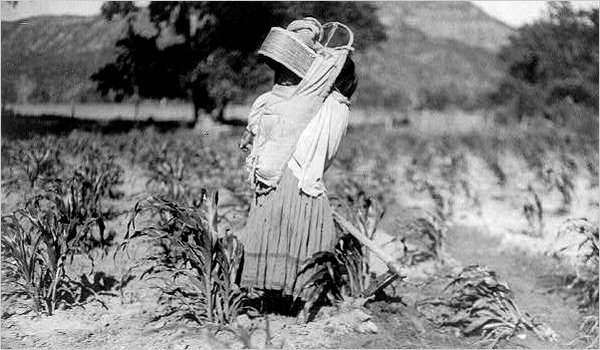 "It is now growing season across the Corn Belt of the United States. Seeds that have just been sown will, with the right mixture of sunshine and rain, be knee-high plants by the Fourth of July and tall stalks with ears ripe for picking by late August. Corn is much more than great summer picnic food, however. Civilization owes much to this plant, and to the early people who first cultivated it. For most of human history, our ancestors relied entirely on hunting animals and gathering seeds, fruits, nuts, tubers and other plant parts from the wild for food. It was only about 10,000 years ago that humans in many parts of the world began raising livestock and growing food through deliberate planting. These advances provided more reliable sources of food and allowed for larger, more permanent settlements. Native Americans alone domesticated nine of the most important food crops in the world, including corn, more properly called maize (Zea mays), which now provides about 21 percent of human nutrition across the globe. But despite its abundance and importance, the biological origin of maize has been a long-running mystery. The bright yellow, mouth-watering treat we know so well does not grow in the wild anywhere on the planet, so its ancestry was not at all obvious. Recently, however, the combined detective work of botanists, geneticists and archeologists has been able to identify the wild ancestor of maize, to pinpoint where the plant originated, and to determine when early people were cultivating it and using it in their diets." Get the Story:
Sean B. Carroll: Tracking the Ancestry of Corn Back 9,000 Years (The New York Times 5/25)
This story is tagged under: