Did you like "Blacktivist" on Facebook? The account was run by Russian trolls, according to the House Committee on Science, Space, and Technology. Source: Russian Attempts to Influence U.S. Domestic Energy Markets by Exploiting Social Media
Environment | National | Politics | Technology | World

Thursday, March 1, 2018
The movement against the Dakota Access Pipeline originated in Indian Country but some on Capitol Hill are seeing links from somewhere far, far away. A new report from the Republican majority staff on the House Committee on Science, Space, and Technology claims trolls from Russia exploited the #NoDAPL movement in order to undermine America's energy sector. The investigation uncovered posts on Twitter, Instagram and Facebook, showing an attempt at overseas influence. "The American people deserve to know if what they see on social media is the creation of a foreign power seeking to undermine our domestic energy policy," Rep. Lamar Smith (R-Texas), the chairman of the committee, said in a press release on Thursday. The social media posts cited in the report originated from accounts with names like "Native Americans United" and "Blacktivist." The latter name has already been associated with Russian troll farms by Special Counsel Robert S. Mueller III, a former head of the Federal Bureau of Investigation who has indicted a Russian government agency and 13 Russians for meddling in American politics. According to the report, "Blacktivist" posted an image from a clash between Dakota Access Pipeline opponents and law enforcement in North Dakota. The late November incident was particularly brutal, resulting in serious injuries to a number of people, including Vanessa Dundon, a citizen of the Navajo Nation who was struck in the face with a weapon at close range, and Sophia Wilansky, a non-Native activist who nearly lost one of her arms. "We're about to celebrate thanksgiving and tell schoolchildren we made peace w Native Americans while DAPL protesters are being tear gassed," a November 25, 2016, post by Blacktivist on Facebook read, according to the report. A heavily pixelated photo from an August 2016 #NoDAPL rally outside of the federal courthouse in Washington, D.C., was used by Russian trolls in a "Born Liberal" post on Facebook and Instagram, according to the House Committee on Science, Space, and Technology. Source: Russian Attempts to Influence U.S. Domestic Energy Markets by Exploiting Social Media
But if Republicans are attempting to show how Russian trolls shifted the #NoDAPL debate, their report doesn't offer strong evidence on that front. Blacktivist's post secured just 497 shares, 398 likes and 293 reactions, according to the committee. Other examples in the report saw far less engagement on Facebook, while two others gained a little more traction on Instagram. In comparison, social media posts from the Standing Rock Sioux Tribe, whose leaders remain opposed to the pipeline, garnered significantly more attention on Facebook. One example from March 17, 2017, right after the massive Native Nations Rise rally and march in Washington, D.C., has seen more than 3,000 likes, reactions and shares. Other posts from the tribe's official page also show far more engagement than those from the trolls. The lack of specifics, and the limited analysis, immediately drew ridicule from leading Democrats. Rep. Raúl Grijalva (D-Arizona), who visited the #NoDAPL encampment in September 2016, said the GOP report was based on "recycled and unsupported claims" and "conspiracy theories." “The only dupes here are the Republicans on Capitol Hill doing errands for the oil industry while Americans demand cleaner energy,” Grijalva, who is the top Democrat on the House Committee on Natural Resources, said in a press release. “You’d think the House Science Committee majority could have spent five minutes investigating the documented, ongoing Russian cyberattacks on our election system instead of wasting our time with another round of unsupported conspiracy theories.” According to the report, one of the Russian trolls attempted to capitalize on the wide reach of @People4Bernie, an independent group that supported Sen. Bernie Sanders of Vermont during the run-up to the presidential election in 2016. On its website, People for Bernie said "#NoDAPL" was one of its main causes and Sanders himself was an outspoken opponent of the pipeline. "@People4Bernie: If we can halt the pipeline at @SacredStoneCamp, we can halt it in Iowa too!" one of of the "Russian Tweets" read, according to the committee. The Sacred Stone Camp was the original #NoDAPL encampment -- others also cropped up as thousands flocked to North Dakota in 2016 to oppose the project. Sanders was extremely popular in Indian Country as he sought the Democratic nomination for president. He apparently was well-liked in Russia too -- the country's Internet Research Agency used its troll farm to promote his candidacy, according to the special counsel's February 16 indictment. "Defendants, posing as U.S. persons and creating false U.S. personas, operated social media pages and groups designed to attract U.S. audiences," the charges read. "These groups and pages, which addressed divisive U.S. political and social issues, falsely claimed to be controlled by U.S. activists when, in fact, they were controlled by defendants." But it turns out that Russia wasn't the only source of questionable #NoDAPL information. Two "Native" websites -- WeLoveNative.com and NativeAmericans.news -- also contained posts about the anti-pipeline movement, according to cached versions of their pages. Neither site, though, originated in Indian Country. They were instead registered and run from Kosovo, a disputed territory in Europe. "Leonardo DiCaprio: I Stand With Standing Rock in the call for NODAPL," a post on NativeAmericans.news once read, according to an archived version. 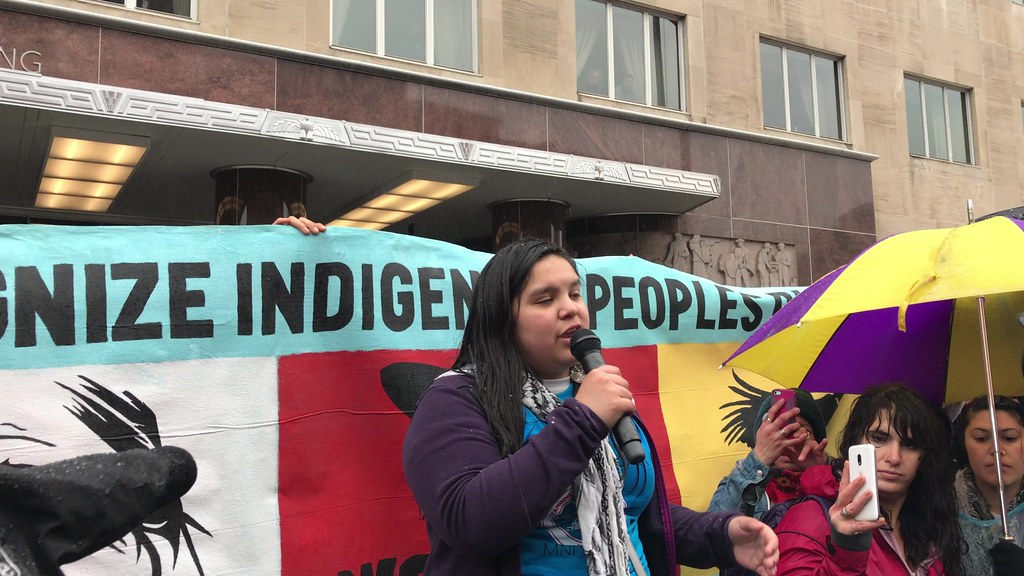 The two sites weren't benevolent either -- they spread misinformation about Native Americans too. Last year, both of them promoted an obviously fake story about President Donald Trump wanting to deport Native Americans "back to where they came from – India." Snopes and PolitiFact, two prominent fact checking sites, first pointed out the connection last year. But the link came to light again after The Associated Press debunked the fake Indians to India article this week. And just last month, Media Matters got Facebook to take down a series of "Native" pages that reached more than 3.8 million people. Those pages originated in Kosovo too. The House committee's report isn't the first to look at links between Russians and Native Americans. Last October, BuzzFeed News showed examples of social media posts that were apparently created by trolls to discuss divisive issues like the pipeline and the shootings of African Americans by police officers. Despite the evidence, Trump has discounted suggestions that Russians promoted his successful Republican campaign. "I never said Russia did not meddle in the election, I said 'it may be Russia, or China or another country or group, or it may be a 400 pound genius sitting in bed and playing with his computer,'" the president wrote on Twitter after the special counsel's indictment last month. "The Russian 'hoax' was that the Trump campaign colluded with Russia - it never did!" the post continued. Oil began flowing through the pipeline on June 1, 2017, after the Trump administration approved the final portion in North Dakota without consulting the affected tribes. Two weeks later, a federal judge said the U.S. Army Corps of Engineers should have taken the tribal concerns into account but he did not order a halt to operations. A follow-up decision in November reconfirmed the "deficiencies" in the administration's handling of the controversial project. But Judge James Boasberg, of the federal court in Washington, D.C., denied a tribal request to stop oil from flowing. The final portion of the pipeline is located at Lake Oahe along the Missouri River. The crossing is less than a half-mile from the reservation of the Standing Rock Sioux Tribe. It also lies upstream from the reservation of the Cheyenne River Sioux Tribe. Both tribes retain water, hunting, fishing and other rights at Lake Oahe under treaties signed with the United States. The Army Corps did not fully address those issues when it approved the final crossing, the judge determined. The Army Corps is now preparing a revised analysis. It is expected to be finished on or around April 2, according to government attorneys.
Join the Conversation
Related Stories
Sylvia Chi: Indigenous activists lead energy divestment movement (February 19, 2018)
Cheyenne River Sioux Tribe demands consultation on DAPL study (February 9, 2018)
Red Fawn Fallis stays jailed for #NoDAPL gun shooting incident (February 6, 2018)
Woman injured in #NoDAPL clash sues government for evidence (February 6, 2018)
Red Fawn Fallis enters guilty plea for #NoDAPL gun shooting incident (January 23, 2018)
Native Sun News Today: 'Water Protectors' film heralds unsung Lakota heroes (January 15, 2018)
Native Sun News Today: Cheyenne River Sioux Tribe raises funds for water (January 10, 2018)
Albert Bender: The original genocide continues with the Dakota Access Pipeline (November 16, 2017)
Dakota Access Pipeline opponents aim to hold law enforcement accountable for brutal tactics (November 14, 2017)
Dakota Access sued for damage to farmland as tribes seek assurances for water (November 3, 2017)
University agrees to Dakota Access lecture after Mark Trahant complained (October 30, 2017)
Native American psychologists slam police tactics a year after Standing Rock (October 30, 2017)
Mark Trahant quits post after university stifles discussion on Dakota Access Pipeline (October 27, 2017)
Kelly Hayes: New documentary remembers Standing Rock in beauty and catastrophe (October 24, 2017)
YES! Magazine: Native women pressure banks to divest from big energy projects (October 23, 2017)
Native Sun News Today: Tribes decry court ruling favoring Dakota Access Pipeline (October 20, 2017)
Judge deals tribes major setback with decision in Dakota Access Pipeline case (October 11, 2017)
YES! Magazine: Water protectors return to Standing Rock for healing ceremony (October 2, 2017)
North Dakota accepts $15M from wealthy backers of Dakota Access Pipeline (September 29, 2017)
Advertisement