Friday, October 5, 2018
Executive director under scrutiny as #MeToo fallout continues
By Kevin Abourezk More tribes are demanding accountability and transparency from the National Congress of American Indians in the wake of sexual harassment scandal that has already cost a senior attorney his job. As the nation's largest and oldest inter-tribal advocacy organization observes a major milestone this month, the turmoil is affecting another high-ranking official. Leaders from two tribes have submitted a pair of resolutions, calling for the organization to suspend its executive director, Jacqueline Pata, pending the completion of an independent investigation into her handling of complaints against John Dossett, the ousted staffer. Harold Frazier, the chairman of the Cheyenne River Sioux Tribe, submitted one of the two resolutions. If it's approved, Pata, NCAI's longest-serving executive director, would be placed on administrative leave until the investigation is complete. Kevin DuPuis, the chairman of the Fond du Lac Band of Lake Superior Chippewa, submitted the second resolution. It would require the NCAI executive committee – its president, vice president, secretary, treasurer and 12 area vice presidents – to hire an independent investigator to examine whether incidents of sexual harassment have occurred within the organization and to determine if they helped create a hostile work environment. Neither Frazier nor DuPuis responded to requests for comment about their efforts. 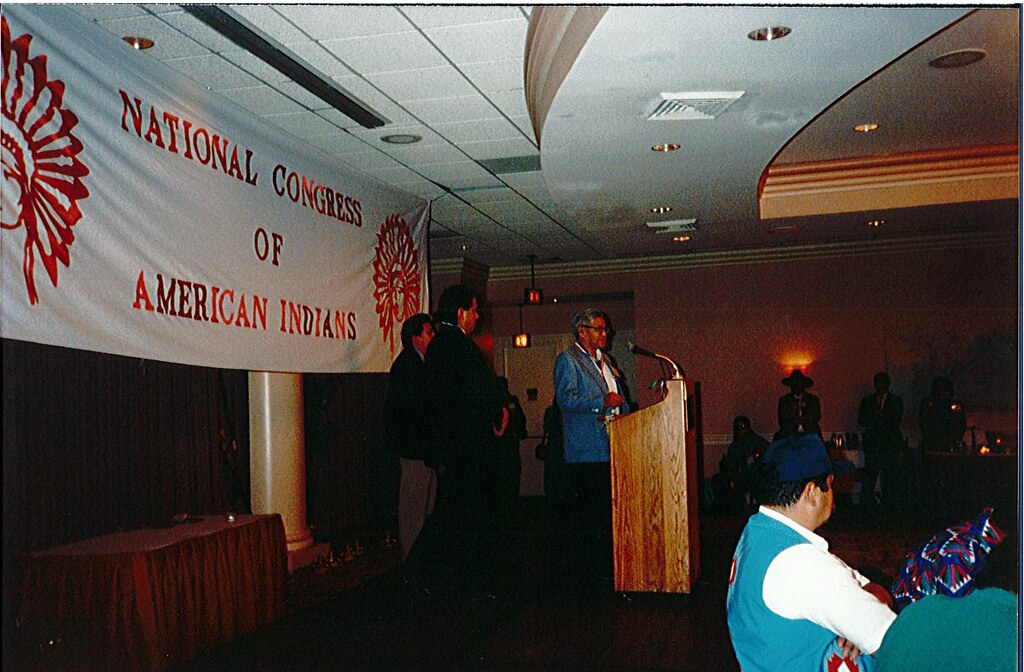 Way Back When: NCAI 75th Anniversary Historical Photo Album
NCAI is hosting its 75th annual convention on October 21-26 in Denver, the same place where tribes came together for a historic founding meeting in 1944. At this year's event, it is expected the organization’s members will consider the two resolutions submitted by Frazier and DuPuis, though NCAI officials could decide to handle their requests in some other manner. But with the conference just a couple of weeks away, NCAI is experiencing some upheaval. On Wednesday, Pata told Indianz.Com that Dossett was no longer employed by the organization, whose Embassy of Tribal Nations is located in Washington, D.C. The announcement came after Dossett sent a lengthy statement – using his NCAI email account – to numerous tribal leaders, Native women advocates and even key staff members on Capitol Hill that afternoon. Through nearly eight pages, he defended his work for the organization and denied the sexual harassment allegations leveled against him by former colleagues. According to Pata, NCAI was blindsided by Dossett's actions. “NCAI had no knowledge of, and John was not authorized to send, that statement to anyone,” Pata told Indianz.Com. “Further, I can only confirm that John Dossett is no longer employed by NCAI." "No other comments will be made regarding this personnel matter,” Pata said. John Dossett, former general counsel and former senior counsel of the National Congress of American Indians, is seen in a 2016 photo at an NCAI event in Washington, D.C. Photo: NCAI
Dossett's departure is a sign of the mounting pressure that NCAI has faced after an August 31 report by Indianz.Com showed Dossett, a married father of two, had been reassigned following an internal investigation into complaints against him. Prior to the investigation, Dossett served as NCAI’s general counsel, its highest-ranking legal position and one with widespread influence in Indian Country. He had held that position since 1995. But after the investigation ended, his title was changed to senior counsel, a different role within the organization, though in the same legal area. Despite the reassignment, some tribal leaders wanted greater accountability within NCAI and have called for an independent investigation into the allegations against Dossett, who was primarily based in Oregon throughout his tenure and was a frequent commuter to and from D.C. and to other events across the country. On September 24, the Pokagon Band of Potawatomi Indians canceled its membership in NCAI and expressed deep concerns about the organization’s actions so far. In a letter to NCAI President Jefferson Keel, the tribe’s chairman, Matthew Wesaw, said the Pokagon were concerned that allegations against Dossett hadn’t been thoroughly investigated. “Jefferson, I fully support you and the work of NCAI, but until NCAI can show this matter has been satisfactorily resolved, the Pokagon Band of Potawatomi Indians has discontinued our membership," Wesaw continued.

I came here proud and we will leave proud! https://t.co/0eRoaRLGBm

Then on Friday, Frazier released a statement criticizing NCAI for becoming a “lobbying venue for corporate interests.” He had mounted an unsuccessful campaign for the organization's presidency at last year's annual conference. In the statement, Frazier called for the removal of NCAI’s executive board – its president, vice president, secretary, treasurer and Pata – for “not allowing a transparent process to address issues and failing to protect the Mashpee Wampanoag Tribe,” a reference to a recent decision by the Trump administration to take the tribe’s reservation out of trust. He also said Pata had failed to “protect staff from bad actors and policies.” “It is important to protect our tribal brothers and sisters from the wolves and not allow them into our camp to prey on us,” Frazier said. The resolution submitted by Frazier cites a “culture of acceptance that has created a hostile work environment” and points to a “senior management” team member who has been accused of sexually inappropriate behavior and “disrespectful, intimidating, demeaning, and threatening behavior.” Jackie Pata, a citizen of the Tlingit and Haida Tribes, has served as executive director of the National Congress of American Indians since 2001. She is the longest serving executive director in the organization's history. Photo: NCAI
The resolution also criticizes Pata for not adequately resolving the situation “to the satisfaction of the General Membership to ensure that the organization is free from any harassment, inequality, and hostility.” The resolution calls for the executive committee to hire an independent investigator to conduct an investigation of current and former staff and suspend Pata pending the investigation’s result, as well as to make a determination about her continued employment following the investigation’s conclusion. The resolution submitted by DuPuis defines in greater detail what the investigation into current and former staff would entail, including how many complaints have been filed against employees in the last five years and how those complaints were addressed. The resolution also calls for examination of any “concerns” that staff members have brought to Pata and, if they were not formalized as complaints, why those concerns were not made formal complaints. The resolution seeks to identify any existing litigation or civil actions pending against NCAI related to wrongful terminations and to create an accurate report of the number of NCAI staff who have left in the last five years. The resolution also calls for a review of all exit interviews of employees who have left in the last five years and, where those interviews don’t exist or have been deleted, to gather personal interviews with those employees. It also calls for an investigation into the suspected deletion of employee files from NCAI’s servers and a detailed report of the organization’s financial status. DuPuis’s resolution further criticizes the NCAI administrative board – its president, vice president, secretary and treasurer – for denying the executive committee’s request for details of an investigation conducted by the law firm of Vedder Price into allegations of sexual harassment against a senior staff member. The resolution claims the denial of the request for the investigation’s results violate provisions of NCAI’s constitution and by-laws. The new effort against Pata, who became NCAI's executive director in 2001, isn't the first of its kind. Four years ago, tribes from the Great Plains and others with land large bases sought her removal. The Great Plains Tribal Chairman's Association, the United Tribes of North Dakota and even a tribe in Pata's home state of Alaska were among those that passed resolutions calling on NCAI to find a new executive director. Members of NCAI's executive board at the time had indeed considered replacing Pata and even began reaching out to potential candidates but did not take further action.
2018 Documents
Jackie Pata Suspension Resolution | External Investigation Resolution
2014 Documents
Great Plains Tribal Chairman's Association Resolution | Kenaitze Tribe Resolution | Montana-Wyoming Tribal Leaders Council [Now Known as Rocky Mountain Tribal Leaders Council] Resolution | Ute Tribe Resolution | United Tribes of North Dakota Resolution Turmoil at NCAI
Join the Conversation
Related Stories
National Congress of American Indians ousts senior attorney after #MeToo outcry (October 3, 2018)
Harold Frazier: Where are the Indians in the National Congress of American Indians? (September 28, 2018)
National Congress of American Indians under #MeToo fire (September 25, 2018)
Prominent Indian Country attorney reassigned after #MeToo allegations (August 31, 2018)
Bureau of Indian Affairs nominee vows 'zero tolerance' for harassment (May 10, 2018)
Bureau of Indian Affairs in disarray with another mysterious departure (April 27, 2018)
Sherman Alexie a role model no more as Native group pulls award (March 21, 2018)
Graham Lee Brewer: Harassment within the Bureau of Indian Affairs (March 21, 2018)
Sherman Alexie caused hurt even before sexual harassment scandal (March 6, 2018)
Sherman Alexie breaks silence after allegations of sexual harassment (February 28, 2018)
Native women are stepping up as sexual harassment remains in the spotlight (December 22, 2017)
One Native Woman's Struggle: 'We've had colonizers beat us up for centuries' (December 22, 2017)
Advertisement