Cronkite News Video by Grayson Schmidt: Town shows its gratitude for the sacrifices of the Yarnell Hill 19
Environment | National

Tuesday, August 13, 2019
Vulnerable communities adapting to ever-present threat of wildfires
By Anton L. Delgado
News21
news21.com
PINETOP-LAKESIDE – Learning to live fire-wise is a cause for celebration in areas that are vulnerable to wildfires. Especially in this White Mountains community, which is becoming one of the country’s next fire-adapted communities. Bounce houses, barbecues and face-painting are hallmarks of the annual White Mountains Communities Firewise Block Party. But this year, the party included presentations from the Community Planning Assistance for Wildfire program, or CPAW, which is funded by the U.S. Forest Service and private foundations. The program works to make communities in the wildland-urban interface “fire-adapted” through fire-safety training, land-use planning, hazard assessments and wildfire risk trends. The National Wildfire Coordinating Group defines a fire-adapted community as one “consisting of informed and prepared citizens collaboratively planning and taking action to safely coexist with wildland fire.” Since its establishment in 2015, CPAW has partnered with 30 communities in 13 states to make them fire-adapted. This year, it received 27 grant applications from seven states and accepted four: Pinetop-Lakeside; Gunnison County, Colorado; and Redding and Mariposa County in California. Firefighter Kevin Short of the Pinetop Fire Department helps Andrew Brooks handle a fire hose during the fifth annual White Mountains Community Firewise Block Party on July 20, 2019. Photo courtesy of Kirk Webb
Kelly Johnston, forestry and fire behavior expert and the lead of the CPAW Pinetop-Lakeside project, said working with residents was a “no-brainer” because of the community’s susceptibility to wildfires and the willingness of local officials to work together. In the past two decades, Pinetop-Lakeside has been forced to evacuate twice by two historic wildfires: the 2002 Rodeo-Chediski Fire and the 2011 Wallow Fire, which together burned more than 998,000 acres. “I’m very excited to have CPAW working with us because they not only save lives and structures, but they make the jobs of our firefighters much safer. It’s a win-win for everyone,” said Chief Jim Morgan of the Pinetop Fire Department, who led to the application for the grant. “If we can survive wildfires, we can have a home to go home to and forests to enjoy.” The idea behind the Firewise Block Party is to get young people engaged in the future of their town. “If we can get an early start to fire-safety education, we can get a multigenerational change to our culture,” Morgan said. “If we start teaching kids to be fire safe, it becomes embedded into them. It becomes a part of them for their whole lives.” The day before the July 20 party, the CPAW team hosted a wildfire training day. “We are really focused on empowering people to … reduce wildfire risk through land planning,” Johnston said. “These meetings and sessions are so important because we are essentially passing them the torch.” At the block party, Johnston took part in presentations on such topics as homeowner fire safety, defensible space, fire-wise landscaping and evacuation preparedness. According to the Department of Agriculture’s 2010 Wildland Urban Interface report, more than 832,000 Arizonans live near or in lands that are susceptible to burning. Across the country, that number is close to 40 million people. Maine, New Hampshire and Vermont have the largest percentage of their populations living in forested communities, the report said. Pinetop-Lakeside, home to about 4,300 people, sits in the largest ponderosa pine forest in the world. Although the trees themselves are fire resistant, the National Park Service says, ponderosa forests are susceptible to flames because they stand amid flammable foliage. “We have not done the thinning that needs to occur to make that land manageable,” Morgan said. “That’s one of the things we are trying to educate our community on.” Firefighter Dalton Delisle of the Pinetop Fire Department helps two youngsters knock down “flames” during the fifth annual White Mountains Community Firewise Block Party on July 20, 2019. Photo courtesy of Kirk Webb
The process to make Pinetop-Lakeside fire-adapted began in April when CPAW organizers made their first visit. Johnston and other members of his team met with forestry experts, homeowners and the fire department. “The real test to know whether or not the community is adapted is how well it fares if a wildfire goes through the community. … The answer to that we won’t know until we respond to a significant wildfire and evaluate how we did,” Morgan said. “Being fire-adapted can take many years, and a community can never reach a fully adapted status because there’s a dynamic relationship with the environment.” 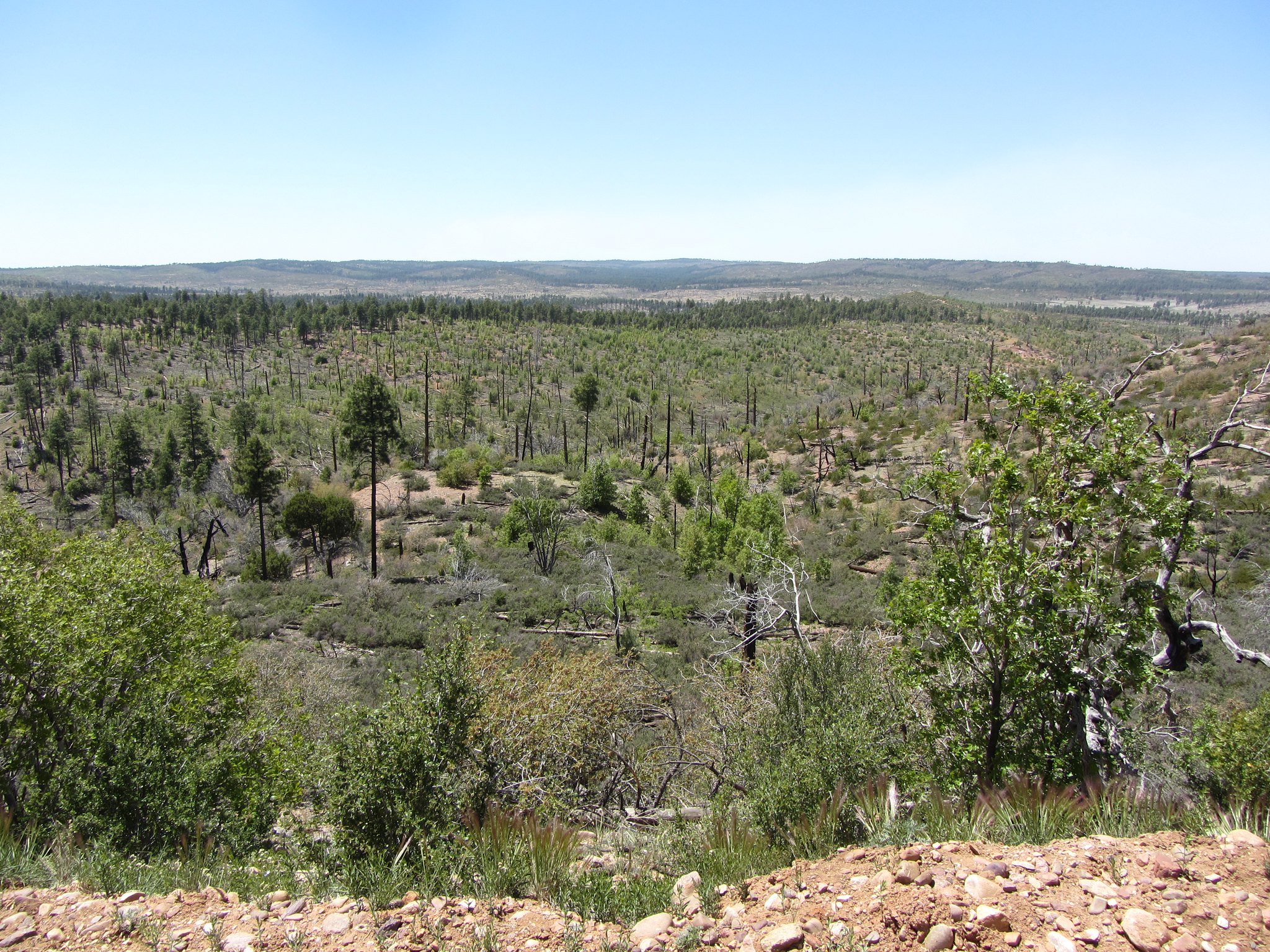 The Rodeo-Chediski Fire of 2002 burned more than 468,00 acres in Arizona, most of it on the Fort Apache Reservation, home to the White Mountain Apache Tribe. Seen here is the forest 10 years after the fire. Photo: Chellede
The wildfire threat has been ever-present this year. According to data from the National Interagency Fire Center, more Arizona land has been burned by wildfires in the first six months of 2019 than in all of 2018. Johnston and other members of the CPAW team will present their findings and recommendations during a final trip to Pinetop-Lakeside this fall. CPAW, which has been operating on year-to-year budget of about $1 million, will learn in the next few months whether the Forest Service will continue funding the program. If it does, applications from wildfire-vulnerable communities will open in August. This story is part of Elemental: Covering Sustainability, a new multimedia collaboration between Cronkite News, Arizona PBS, KJZZ, KPCC, Rocky Mountain PBS and PBS SoCal. It appeared on Cronkite News and is published via a Creative Commons license.
Join the Conversation
Advertisement