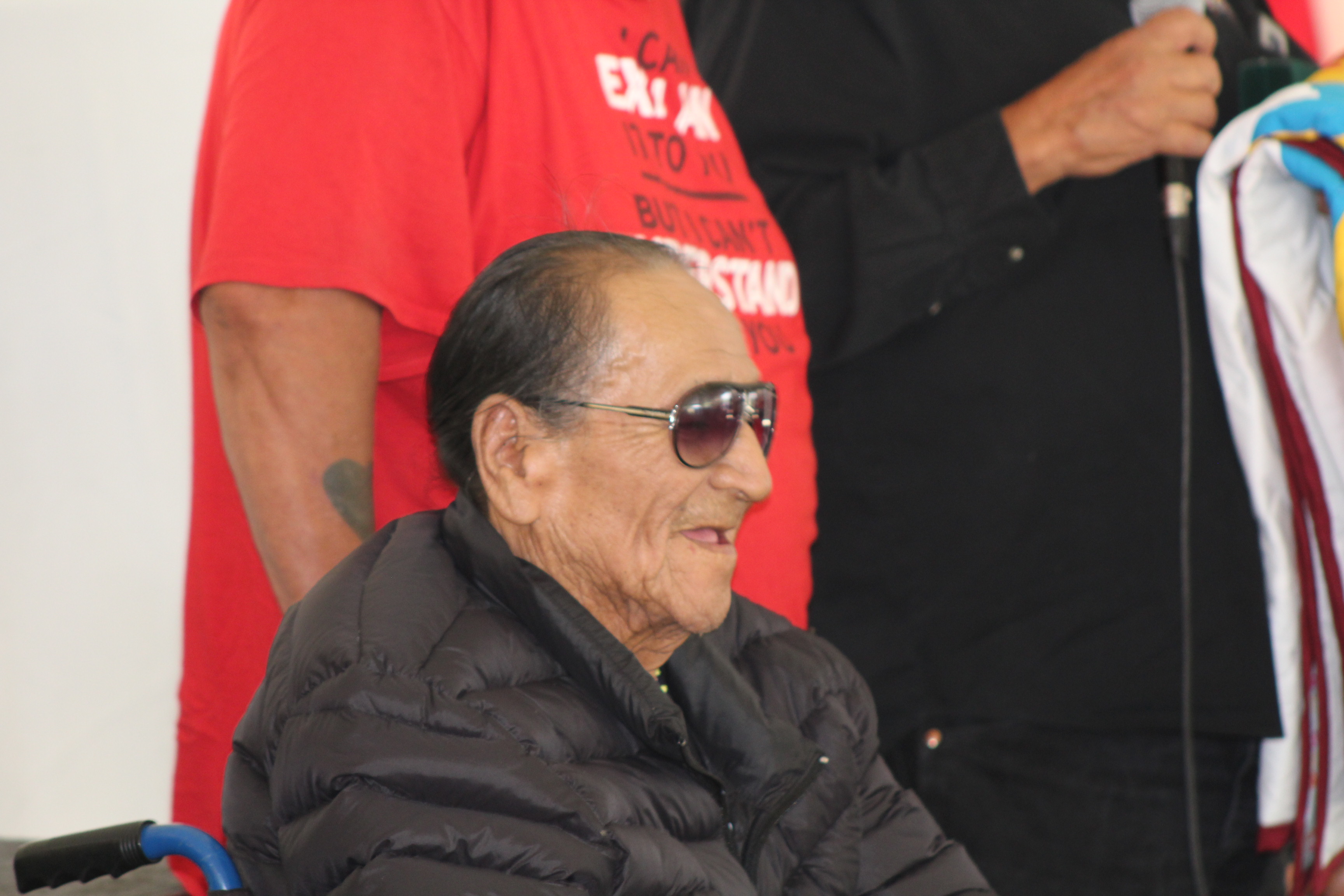 Leonard Crow Dog at the 44th Anniversary International Indian Treaty Council Conference in Bear Butte Lodge, South Dakota, in June 2018. Photo by Roberto Borrero / IITC
Honoring Chief Crow Dog, His Many Gifts, and Wishing Him A Peaceful Journey
By Rodney Bordeaux
President, Rosebud Sioux Tribe
rosebudsiouxtribe-nsn.gov
Leonard Crow Dog was a powerful Wicasa Wakan, Holy Man, with a beautiful vision of the Sacred Mystery of the Universe. Leonard was in touch with the sacred power that connects all of us and the Creation. As a young man, Leonard Crow Dog learned from his father Henry Crow Dog and Lakota elders. He did not go to school, instead his parents enlisted four medicine men to guide his education. Throughout his life, Crow Dog learned from the University of the Universe, as he would say, and he shared his understanding of WoLakota with our Sicangu Oyate, the Oceti Sakowin, and Peoples of all Nations. Leonard Crow Dog was the spiritual advisor to the American Indian Movement (AIM) and close friends with Russell Means. He stood for human rights, and he knew that the Lakota received our rights from the Creator—our Breath of Life, Freedom to dream and live our visions, and our sacred duty to protect Unci Maka, Grandmother Earth. Because the Creator blessed us with our rights, Chief Crow Dog knew that the wakanyajea, the children, would return to our sacred lands in the Black Hills. He always sought to promote our Lakota youth and young people, and to keep our Lakota traditions strong for the coming generations. During the 1973 Wounded Knee Occupation, Chief Crow Dog visited Wounded Knee, and described his spiritual vision:
Standing on the hill where so many people were buried in a common grave, standing there in that cold darkness under the stars, I felt tears running down my face. I can’t describe what I felt. I heard the voices of the long-dead ghost dancers crying out to us.
He led a modern-day Ghost Dance at Wounded Knee to honor those who went before. During the 1970s, the FBI persecuted AIM and its members for their stand for American Indian Independence. Early one morning in September 1975, 185 FBI Agents raided Crow Dog’s Paradise looking for Leonard Peltier, and arrested Chief Crow Dog. They gave him a long sentence, but thousands of people from around the world, including the National Council of Churches, sought his release. After two years in Federal Prison, the Federal Court released Leonard upon seeing the monumental outpouring for religious Freedom. In 1978, Chief Crow Dog was instrumental in promoting the passage of the American Indian Religious Freedom Act.

Leonard Crow Dog was the American Indian Movement spiritual leader. He and his family were persecuted for their power, and they sacrificed a lot for American Indian religious freedom. Rest in power. You will be missed. (1942-2021). pic.twitter.com/StkJsCMfgf

Chief Crow Dog venerated the Buffalo Nation, and supported the return of the Buffalo to our Lakota Oyate reservations and the Black Hills. He knew that where there are Buffalo, Lakota People will flourish. Crow Dog truly was a Wicasa Pejuta, medicine man, who knew traditional medicine, and used natural medicines to cure the sick. People from around the world, Europe, Canada, the United States, Mexico, and South America sought his wisdom and guidance. At his Sun Dance, he gathered with Lakota from all of the Seven Council Fires, and filled with the sacred power of life, he blessed our Lakota People and renewed our ties with Tunkasila, Wakan Tanka, Grandmother Earth, the Sun and all living things. He kept our Lakota language and traditions alive for our future generations. Always first in his heart are the Wakanyajea, the sacred gift of the Creator, our children and grandchildren, and the generations to come. Chief Crow Dog promoted peace and unity for all Native Peoples and all Humankind. Just last month, although he was sick, he joined the gathering of the Oceti Sakowin for two days to consider the best manner to work towards the recovery of our sacred lands in the Black Hills. With his strong spiritual guidance, he always gave us inspiration, courage and determination to move ahead. He would say, “We can do it, let’s do it.” Leonard was a loving father and grandfather, husband, brother, and uncle—Lekshi to our Lakota People. We extend sympathy and condolences to his wife, children, grandchildren, relatives and many, many friends and followers. He will be truly and deeply missed. Leonard, we thank you for all of your good works and care for our Native Peoples. Chief Crow Dog, we wish you the Blessings of Wakan Tanka, the Great Spirit and peace as you find your relatives on your Sacred Journey. Rodney M. Bordeaux was born and raised in Rosebud, South Dakota, and enjoyed a childhood on the beautiful Rosebud Reservation learning the importance of community involvement and public service. Bordeaux has dedicated much of his professional life to serving the Rosebud Sioux Tribe including twenty years in education, twelve years on the tribal council, and is serving his fourth term as President.