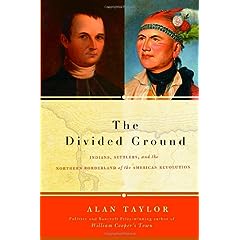 "[Alan] Taylor's new book, "The Divided Ground," tackles the subject of American Indians head-on, showing how Iroquoia, the land of the Six Nations — Mohawks, Oneidas, Tuscaroras, Onondagas, Cayugas and Senecas — was ground down between the British Empire and the new United States. Taylor's story begins in the 1760's with Sir William Johnson — one of those high-spirited figures, half genius, half con man, who flourish on frontiers. Johnson, an Irish trader, built himself a country house in the wilderness (Johnson Hall, now in Johnstown, N.Y.), took a Mohawk mistress, Molly Brant, and made himself the go-to guy for Iroquois and British alike. His last great coup was arranging a mammoth conference of 3,102 Indians in 1768 to draw a line separating their land from colonial settlers and real estate speculators. The westward pressure of white men was intense, but Johnson hoped to manage it by brokering deals between the British Empire and its Indian allies. Johnson's efforts at peacemaking quickly fell apart. He died in 1774, and the colonists rebelled the following year. The American Revolution confronted the Iroquois with a hard political choice of a kind they were always loath to make. Most of them sided with the British, though the Oneidas backed the Americans; the fighting hammered them all. The Iroquois were pressed in other ways as well. Liquor was a scourge like crack, often peddled by conniving white negotiators. "Drink no strong water," a temperate Oneida warned. "It makes you mice for white men, who are cats." Iroquois men were unwilling to take up farming, which in their eyes was women's work: "Man was not made to work in the earth like a hedgehog," one friendly American was told, "but to go to war and hunting." But as encroaching white settlements diminished game, the Iroquois found themselves regularly starving, and dependent on white largesse — which came in return for land deals that further shrank their hunting grounds. Trumping all these factors was the brute weight of demography. By 1784, Taylor says, 6,000 Iroquois faced 240,000 New Yorkers. The Oneidas alone, who were only 600 strong, owned six million acres. Iroquoia was a land rush waiting to happen." Get the Story:
The End of Iroquoia (The New York Times 4/23)
pwnyt
First Chapter: 'The Divided Ground' (The New York Times 4/23) Related Stories:
Police raid Native protest camp at construction site (4/21)
Editorial: A familiar scene at site of Native protest (4/21)
Native protest at construction site continues (03/23)