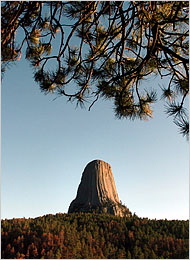 "Where does the West begin? That's a matter of opinion. But on the high plains, a good argument can be made that it starts in the Black Hills in western South Dakota. The brick-red soil of the rolling, ponderosa-pine-covered Black Hills also extends into Wyoming, and this part of the region is less well known. Its landscape, and that of the high plains and mountains to the west, holds a fascinating history of settlement and conflicts, from Indians to cowboys to the cavalry, including George Armstrong Custer. A road trip along Interstate 90 that begins on the South Dakota-Wyoming border takes you through wide-open country � a classic Western landscape, with more horses and cows than people and many miles between gas stations and good restaurants. MILE 2 Vore Buffalo Jump: Just over the South Dakota border on I-90 is the tiny, cottonwood-tree-shaded village of Beulah, Wyo. � population 33, the sign says. A few miles east of town, stop and see a large 45-foot-deep hole called the Vore Buffalo Jump, sandwiched between I-90 and the frontage road. MILE 50 Devils Tower: From Beulah, stay on Interstate 90, exit at State Highway 14 and follow the signs to Devils Tower, the nation's first national monument, set aside by President Theodore Roosevelt in 1906. In Steven Spielberg's "Close Encounters of the Third Kind" it was the place where the aliens landed. MILE 192 Indian Wars Sites: The Cheyenne, Sioux and other tribes deeply resented the invasion of whites into their last great hunting ground and they constantly attacked settlers along the Bozeman Trail. MILE 285 The Custer Battlefield: Get back on Interstate 90 and continue into Montana. About 60 miles from Sheridan, in the rolling hills at the foot of the Wolf Mountains you can stand atop the grassy knob of Last Stand Hill at the Little Bighorn Battlefield National Monument, where it all ended for Lt. Col. George Armstrong Custer on a sweltering June day in 1876. MILE 343 Pictograph Cave: A state park and national historic landmark, Pictograph Cave is actually a complex of caves � Pictograph, Middle and Ghost � in an impressive sandstone cliff a few miles south of Billings. To reach it, drive west on I-90 from Hardin, near the Custer Battlefield, heading to Billings, and look for signs. The complex has produced more than 30,000 artifacts going back more than 4,500 years and is considered Montana's most important archaeological site." Get the Story:
A New Look at the Old West (The New York Times 6/9)
pwnyt Related Stories:
Travel: Tribal life in the Mojave National Preserve (5/26)