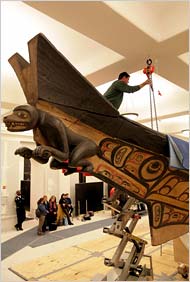 The American Museum of Natural History in New York will unveiled a restored Haida canoe on Friday, minus the life-sized Indians that used to paddle it. The canoe, created in the late 1800s, was taken from a Haida community in British Columbia, Canada. The 17 Indian figures were added in 1910 by a non-Indian sculptor. As part of a $37 million restoration at the museum, the canoe, which features an eagle and a killer whale, was cleaned up. But since the Indian figures represented a composite of Pacific Northwest tribes, rather than the Haida, they won't be put back up. Get the Story:
Canoe Goes Upriver, Without Its Paddlers (The New York Times 11/14)
pwnyt Relevant Links:
American Museum of Natural History - http://www.amnh.org