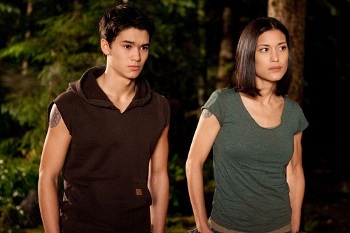 "Kidzworld asks “Breaking Dawn’s” wolves Seth and Leah (cute Booboo Stewart and Julia Jones) about shape-shifting and acting with Taylor Lautner. These young actors love their more active roles in the two Breaking Dawn films. Kidzworld: Can you talk about your Native American heritage and portraying Native Americans in a modern sense? Julia: Sure. I am part Chickasaw and Choctaw, but I’m a multi-ethnic person; that’s just a part of my identity. I’ve been playing native roles for a very long time. It has been a really rewarding experience in a lot of ways because there is a lot to show. It’s an opportunity to portray a group of people that are not portrayed very frequently and very accurately at all in the media. I cherish that. I think that there should be more roles for Native actors in contemporary pieces. It’s an important part of who I am and I’m very proud to play Quileute. The tribe is incredible. I’ve been there to the reservation and it's very exciting for us to have a contemporary Native American culture be portrayed in the Twilight movies. I think it's done amazing things. Booboo: Yeah, I think it’s cool. I try not to say I’m this and this and this, because I'm just trying to be a little bit of everything you know? I think it's fun to play the character and I don’t really think of it as I'm just playing a Native character. I'm just playing Seth Clearwater in Twilight." Get the Story:
“Breaking Dawn”-The Wolfpack: The Clearwaters (Kidzworld 11/14)
Join the Conversation