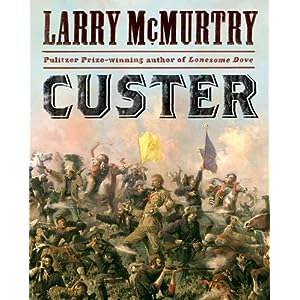 "A full 136 years after the last bluecoat in the Seventh Cavalry fell, the literary autopsy of the Battle of the Little Bighorn shows no sign of letting up, with fresh students drawn to the historical morgue every year. George Armstrong Custer — we can’t quit you. What happened on that hot day of June 25, 1876, one of the last violent clashes in the mostly one-sided Indian wars, is an ever-shifting narrative, moving with the times. For quite a while now, Custer has been shorthand for hubris, ignorance and had-it-coming, but in earlier decades Custer was a hero. An iconic picture called “Custer’s Last Fight” once graced the beery interior of nearly every saloon in the United States, courtesy of an aggressive bit of cultural imperialism by ­Anheuser-Busch. Larry McMurtry, the prolific Texas author, screenwriter and book collector, knows something about the fetish for the fallen commander, and confesses that “as a rare book dealer I once owned a collection of Custerology numbering more than 1,000 items: scrapbooks, diaries, trial transcripts, regimental histories, publications of learned societies, reprints of reprints, and so on.”" Get the Story:
The West (The New York Times 12/2) Another Review: Big Trouble at Little Bighorn (The Wall Street Journal 12/1) Related Stories:
Review: 'Custer' book explores short life of an Indian fighter (11/05)