The flag of the Haudenosaunee Confederacy flies at the #NoDAPL rally in Washington, D.C., on August 24, 2016. Photo by Indianz.Com / Available for use under a Creative Commons Attribution-NonCommercial-ShareAlike 4.0 International License
Opinion

Doug George-Kanentiio: For those standing with Standing Rock

Wednesday, November 23, 2016
What to Carry in a Crisis
For Those Standing with Standing Rock
By Doug George-Kanentiio
Our Iroquois people have decades of experience living through political and social crisis whether in stand offs with the police or organizing protests on a national and local scale. We have been, like those intrepid protectors at Standing Rock, tear gassed, arrested, beaten and jailed. We have picked up arms as a last resort but have also relied on the wisdom of our traditional leaders to get us out of very dangerous situations. As one example, in June of 1980 my home community of Akwesasne was under siege by contingents of the New York State Police, ordered to our territory by then governor High Carey in order to undermine the traditional people as he secretly sought to extinguish our land claims by dealing with the reactionary St. Regis Tribal Council, an entity imposed upon the Mohawks by state law in 1892. Governor Carey thought it easier to make his compact with the Tribal Council to the exclusion of the Mohawk Nation and to that end actively supported the Tribe's creation of a police force which tried to enforce state laws on Akwesasne territory. Naturally, the Mohawk Nation opposed this move and its citizens found themselves brutalized by the tribal cops who were backed by the state police. By 1980 the situation deteriorated until Governor Carey ordered an attack by the troopers and tribal cops on Friday, June 13. Leaders from the Haudenosaunee Confederacy contacted Carey and told him that an assault on the Mohawks would mean an immediate response by the other nations which would include suspension of all public utilities on Native lands, the disruption of traffic on roads passing across Iroquois territory and the sending of support groups to Akwesasne. The governor was unaware that so many highways, power lines and gas pipelines were located on sovereign Iroquois lands; when confronted with this fact he ordered the troopers to retreat. 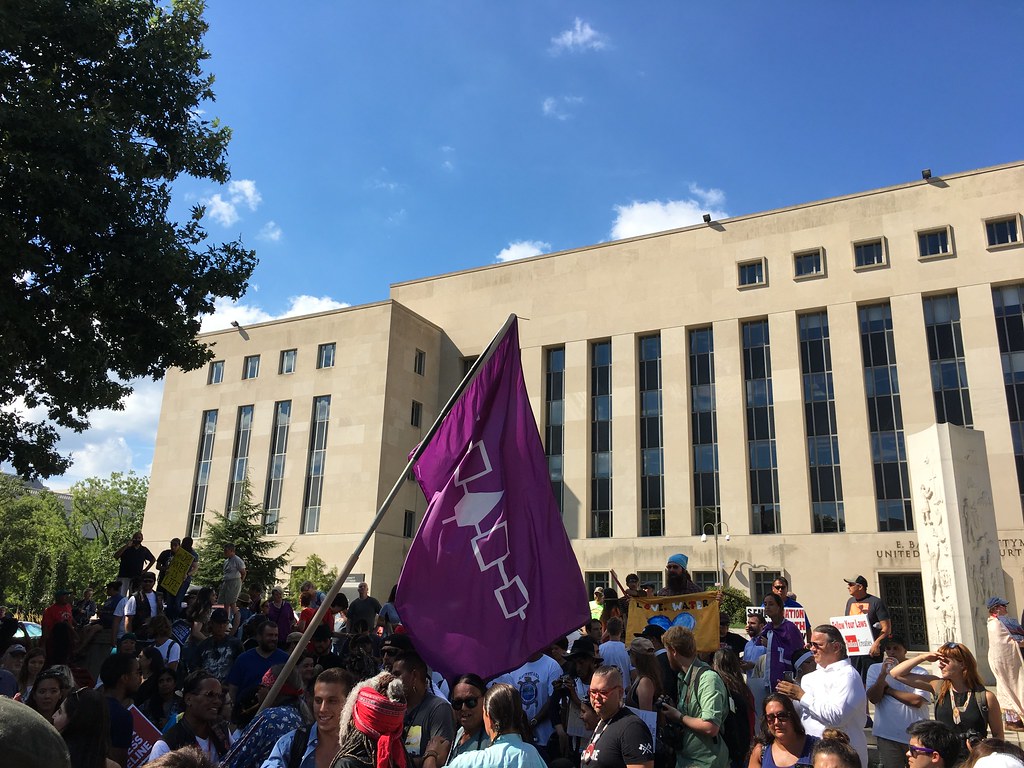 We knew the State Police were ill prepared to engage in a physical fight with us but that they were there as pawns. If any of them were hurt the National Guard would have been directed to Akwesasne with far more serious consequences. We know that local deputies in North Dakota are not trained in how to respond to massive protests, they know little about crowd control and even less as to how to restrain their emotions. They deal with drunk drivers, domestic disputes, property issues, minor warrants and traffic control. No one has taught them what to do when faced with an issue which has now become international. The statements made by the Morton County Sheriff Kyle Kirchmeier show his frustration at having to use his limited resources to respond to the water protectors. He lacks the skills to negotiate an equitable resolution since his reaction has been to apply force in almost all instances. There are ways to reduce tensions, to bring all sides together and at least secure a temporary retreat. Dakota Access, the highly profitable company pressing for the pipeline, does not need the additional income at this time. Its finances are stable and there is an abundance of fossil fuels across the Nation. Whatever they plan to pump across Standing Rock lands or under the Missouri is not essential and that should compel the company to seek an equitable resolution. Failing this, the protectors will face more hostile actions by the police including the gradual increase in the application of brute force. When tear gassed there are ways to minimize its effect. Having cameras on site from national news sources does act as a restraint on the police but when enveloped by the gas it is essential to protect soft tissue such as the eyes. Remove contact lenses before joining the line and wear shatterproof ski goggles so it does not enter the eyes. Wear a bandana dipped in apple cider vinegar to minimize how much of the gas enters the throat and lungs. Wear loose clothing as the gas will cling to whatever one is wearing; minimize skin exposure by having gloves and a hat. Once sprayed removed the contaminated clothing. Flush your face with Maalox and milk to neutralize the gas. Have a crew ready with buckets of water with 1/4 mild dishwater to further remove the sting. Have a group of first aiders on site wearing reflective vests and arm bands which identify them as medical personnel. They will in turn need the same "jump kits" used by rescue and emergency teams. In these jump kits are bandages,stethascopes, adhesive tape, splints, ointments, inhalents, gauze, alcohol, iodine and distilled water-lots of it. The cops should be alerted as to the presence of the medics and how they will be identified. Having emergency transport ready is vital -- there must be individuals or groups that know where these can be purchased and driven to Standing Rock. Developing a working relationship with the regional hospitals is important. Communications devices like field radios (used by hunters) are much more durable than cell phones and have impressive range durability. Police scanners should be in every organizing area-all police radio codes are available on line. Ham radios are inexpensive and can connect with the internet using batteries-they are very difficult to jam. It may be that the election of an individual who has a vested interest in Dakota Access will mean additional police, perhaps a contingent of the National Guard. Don't be surprised if the U.S. federal agencies are directed to investigate, arrest and detain at least some of the protectors. This is a noble and historic struggle with no clear conclusion other than there is now a legacy of people who have adopted the Native philosophy of water is life and we stand as one in defense of the rights of the unborn at personal risk if necessary. Doug George-Kanentiio is an Akwesasne Mohawk currently residing on Oneida Territory with his wife Joanne Shenandoah.
Join the Conversation
More from Doug George-Kanentiio:
Doug George-Kanentiio: The war on Natives and our Earth begins (11/9)
Doug George-Kanentiio: A voice for residential school survivors (10/19)
Doug George-Kanentiio: We all must do our part for Standing Rock (10/07)
Doug George-Kanentiio: Prophecy and the people at Standing Rock (09/15)
Doug George-Kanentiio: Lacrosse must be returned to rightful place at Olympics (08/16)
Doug George-Kanentiio: Iroquois people are well versed in the illegal immigration experience (08/04)
Doug George-Kanentiio: Donald Trump and his campaign of hatred (7/25)
Doug George-Kanentiio: Native people bear terrible burden in U.S. (06/13)
Doug George-Kanentiio: Hillary Clinton is clear choice for Iroquois (6/8)
Doug George-Kanentiio: Mohawk actor Jay Silverheels was more than famous 'Tonto' role (05/23)
Doug George-Kanentiio: Restoring some balance to Native nations (04/18)
Doug George-Kanentiio: Mohawks must reclaim powerful names (03/15)
Doug George-Kanentiio: Town repays Oneida Nation with racism (02/11)
Doug George-Kanentiio: Oscar boycott ignores plight of Native people (01/20)
Doug George-Kanentiio: All genders respected in tribal societies (01/12)
Doug George-Kanentiio: Onondaga Nation brings honor to us all (10/01)
Doug George-Kanentiio: Iroquois Nationals score silver at games (09/28)
Doug George-Kanentiio: A historic opening for lacrosse games (09/24)
Doug George-Kanentiio: Onondaga Nation hosts lacrosse games (09/22)
Doug George-Kanentiio: In the golden era of Iroquois lacrosse (08/12)
Advertisement