Tuesday, January 30, 2018
It's official -- there are now 573 federally recognized tribes in the United States. Some 400 years after welcoming the first settlers at Jamestown in Virginia, the Chickahominy Tribe, the Chickahominy Tribe - Eastern Division, the Monacan Nation, the Nansemond Tribe, the Rappahannock Tribe and the Upper Mattaponi Tribe gained formal recognition of their status on Monday. That's when President Donald Trump signed H.R.984, the Thomasina E. Jordan Indian Tribes of Virginia Federal Recognition Act, into law. “Today we celebrate a decade of hard work,” Rep. Rob Wittman (R-Virginia), the sponsor of the House version of the bill, said in a press release on Monday. "Our ‘first contact' tribes of the Commonwealth of Virginia will finally receive the recognition they deserve." "Virginia’s tribes have loved and served this nation, and today our country is honoring them with the federal recognition they deserve," Sen. Tim Kaine (D-Virginia), a former Democratic candidate for vice president and the sponsor of the Senate version of the measure, added in a post on Facebook. Recognition, though, is more than symbolic, as the tribes will gain access to federal health care, education, housing, social service and other key programs. The figure could be substantial -- the Congressional Budget Office once put the cost at $78 million in the first four years of federal recognition, assuming lawmakers actually set aside the funds through the appropriations process.
Video courtesy Sen. Tim Kaine: H.R.984 - Virginia Tribes Federal Recognition Bill
Over those four years, the Bureau of Indian Affairs and Department of the Interior budgets would have to grow by at least $29 million in order to help the tribes without taking funds away from the rest of Indian Country. The Indian Health Service budget would have to grow by at least $49 million, according to the CBO's estimate, which was issued in 2015 and was the last formal score for the recognition bill. The BIA's budget also includes a line item specifically for "New Tribes" to help them with immediate needs. The amount is typically small, usually because of the small number of newly recognized tribes. In fiscal years 2016 and 2017, the item was around $463,000. The BIA's 2018 greenbook anticipates $160,000 in the account for the current fiscal year. But with six tribes joining the family, the figure would need to grow substantially in the coming years. According to the BIA's formulation standards, the baseline level is $160,000 for tribes with 1,700 citizens or less. The figure doubles to $320,000 for tribes with populations of up to 3,000. "For newly recognized tribes with more than 3,000 members, the funding level would be determined on a case-by-case basis," the BIA states. None of the six tribes appear to have more than 3,000 citizens, according to a review of publicly disclosed figures. The Monacan Nation appears to be the largest, with more than 2,100 citizens. Others are smaller -- the Chickahominy Tribe's population is about 850 while the Nansemond Tribe counts about 200 citizens. Tribes are considered "new" for the first three years of recognition, according to the BIA. "By the third year, new tribal governments will have built government systems and set funding priorities that address the needs of their communities," the latest greenbook states.
Indianz.Com on Google Maps: Tribes in Virginia

For health care, the IHS would be responsible for designating service areas for the new tribes. H.R.984 already includes lists of eligible counties for each tribe, with four of them overlapping due to their proximity to Richmond, the state capital. The Chickahominy Tribe, the Chickahominy Tribe Eastern Division, the Rappahannock Tribe and the Upper Mattaponi Tribe are all located in and around Richmond. Their service areas would overlap with that of the Pamunkey Tribe, whose federal status was acknowledged through the BIA rather than Congress. The IHS designated the Pamunkey service area last July, more than a year after the tribe gained recognition. The Monacan Nation and its service area are located in the western part of the state, near Lynchburg. The Nansemond Tribe lies to the south, near Norfolk. Beyond federal funding, the tribes will also be able to protect their homelands through the land-into-trust process. Using the word "shall," the new law requires the BIA to place certain lands in trust for each of the respective tribes, so long as the land had been acquired before 2007 and is located in specific counties. For future acquisitions, the tribes are limited to those same counties. The BIA would have the discretion to approve or reject these applications. Most of the tribes do not presently have large land bases, according to publicly disclosed figures. The Upper Mattaponi Tribe, for example, only owns about 32 acres, while the Rappahannock Tribe owns about 120 acres. Regardless of where the tribes acquire land, they will never be able to follow the Indian Gaming Regulatory Act. The new law includes an airtight prohibition on casinos, a concession the tribes accepted as they sought federal recognition through Congress for nearly two decades. The concession didn't make the process any easier, however. Recognition bills have been introduced as far back as 2000 but the tribes were never able to gain significant traction until the past couple of years. The tribes always had bipartisan support but Republican lawmakers have been extremely reluctant to pass recognition bills, citing constitutional and policy concerns. That explains why H.R.984 is the first stand-alone to clear both chambers of Congress since the mid-1990s, when Democrats were in control of the legislative and executive branches. During that era, three tribes in Michigan and another in Alaska gained recognition through Congress. Subsequently, two more tribes, one in California and another in Oklahoma, gained federal recognition when they were included a large "omnibus" Indian bill in December 2000. That happened to be one of the last bills signed into law by then-president Bill Clinton before he left office a month later. He had also signed the bills for the Michigan and Alaska tribes. Despite the past controversies over recognition, H.R.984 saw smooth sailing in the 115th Congress. The bill passed both the House and the Senate with unanimous support. “This is an important moment in U.S. history,” President Jefferson Keel of the National Congress of American Indians said in a congratulatory statement on Tuesday. “As the U.S. government continues to correct the mistakes of the past, we look forward to seeing the federal government honor its trust obligations to these six tribal nations in Virginia and all tribal nations.”

Virginia Tribes at the U.S. Capitol 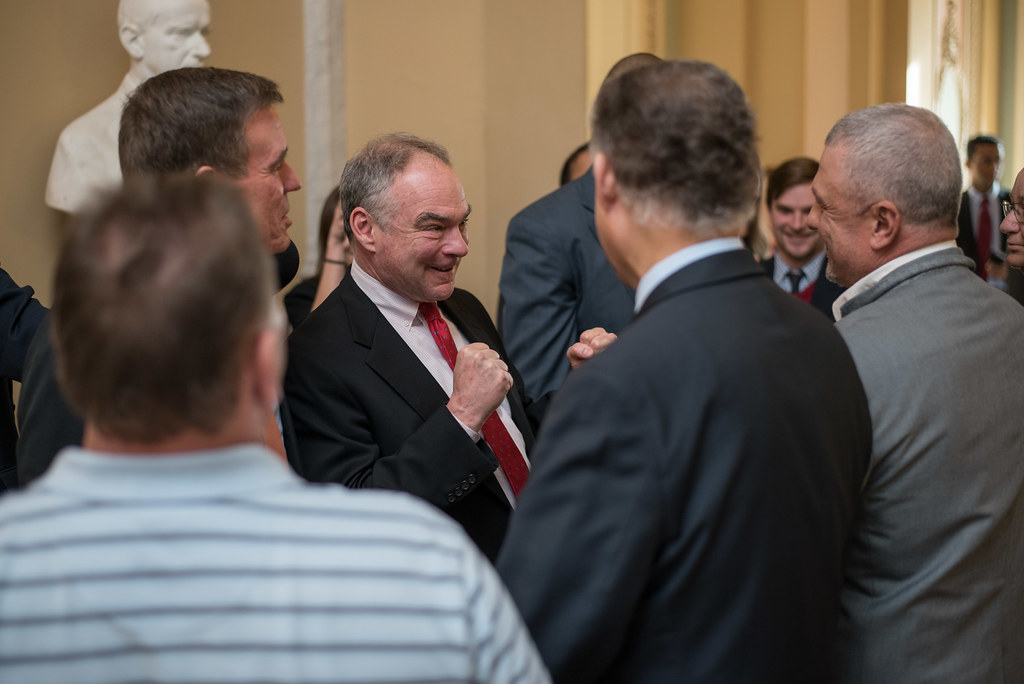