By Brian Lightfoot Brown In competitive running, there is no race as internationally known as the Boston Marathon. The race which lures the world's top long distance runners to compete. Every year on Patriot's Day in Massachusetts, the Boston Marathon takes place with hundreds of thousands of runners participating. As the 2018 Boston Marathon is upon us, there is one runner who was a true fan favorite during the 1930, the “Golden Age” of the Boston Marathon. Ellison “Tarzan” Brown was a charismatic and refreshing break from the norm. Brown was a Narragansett Indian from Rhode Island who had an eventful first try at the Boston Marathon in 1935. Brown arrived in a running outfit made from one of his mother's dresses. It was made by Tarzan's three sisters (Myra, Alice aka Nina and Grace). The running shoes that he wore on this day were in poor condition and falling apart. More than midway through the race, Tarzan took off his shoes, threw them aside and finished the marathon barefoot and came in 13th place. Johnny Kelley won the 1935 Boston Marathon but most spectators were amazed with the Narragansett Indian from Rhode Island. Tarzan was an instant star among Boston Marathon followers. 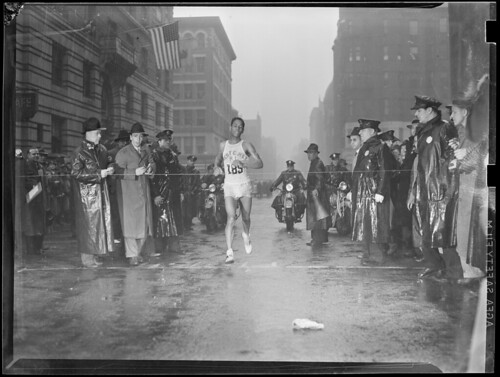 A photo from the collection of the Boston Public Library shows Narragansett citizen Ellison “Tarzan” Brown winning the Boston Marathon in 1939.
One year later, Brown took off at the start of the Boston Marathon and built a respectable lead over the rest of the field. As Tarzan Brown slowed his pace and trotted towards the Newton hills, defending Boston Marathon winner Johnny Kelley managed to catch up to Tarzan, who was slowly jogging in an almost trance-like pace. Johnny Kelley gave Tarzan a pat as he passed him, which only seemed to reawaken Tarzan. Tarzan instantly came to life as the two runners battled through the Newton hills until Tarzan took the lead for good on the last hill, while Johnny Kelley faded to a 5th place finish. Ellison “Tarzan” Brown had won the 1936 Boston Marathon and Boston Globe writer Jerry Nason stated that Tarzan “broke Kelley's heart” on the last of the Newton hills, which created the “Heartbreak Hill” nickname. The victory helped Tarzan to qualify for the 1936 U.S. Olympic Team, which included the legendary Jesse Owens. Tarzan was a brown-skinned man going to Hitler's Germany, but was unable to finish the Olympic Marathon due to leg cramps. When Tarzan stopped to rub the cramps out of his legs he was disqualified when someone from the crowd tried to assist him. When Brown returned home after the Olympics, he faced harsh criticism. The detractors only lit a fire in Tarzan where he went on a streak of dominating races. The most notable of these wins came when Tarzan had won two marathons within 24 hours of one another.
Roger Williams on YouTube: Ellison "Tarzan" Brown - Boston Marathon winner

In 1937 and 1938, Tarzan didn't do as well due to missing training time to start a family. However in 1939, Tarzan arrived and ate hot dogs and drank milkshakes shortly before the marathon was to begin, stating that he had missed breakfast. In the rain, Ellison “Tarzan” Brown took his 2nd Boston Marathon victory and was the first runner to finish in under 2 hours and 30 minutes on the current 26.2 mile course. He continued winning key races and was going to be selected to the 1940 Olympic Games until the Olympics were canceled due to the outbreak of World War II in Europe. Tarzan faded from the running world over the next few years but was a legend to his Narragansett people. He was and still is a hero. Sadly, his feats fade further and further into the peripheral. Ellison “Tarzan” Brown is a widely unknown name outside of Boston Marathon historians and his own Narragansett tribe. He not only won the 1936 and 1939 Boston Marathons, not only competed in the 1936 Olympic Games but he was also inducted into the American Indian Athletic Hall of Fame in 1973, just 2 years before his untimely death. Ellison “Tarzan” Brown deserves his name to become more of a household name, in the world, but even more so in Indian Country, where most Natives have never heard of him. He is an overlooked hero and should become a household name in Indian Country when indigenous legends are discussed. As Natives, we need to make sure all of our heroes are remembered. Brian Lightfoot Brown is a citizen of the Narragansett Tribe and is a grand nephew of Ellison “Tarzan” Brown. This opinion is his own.
Join the Conversation
Advertisement